On a site that is now off line, most likely in 2011, I reacted to graffiti I’d seen along San Pablo Avenue in Oakland, California. It said, “Kill Cops Not Neighbors.”

I noted that police are the only people in our society who are authorized to use even lethal force against other people and that they do so largely in service to propertied interests. I would, now, if I did not then, add that police rarely become police because they want to be told to obey the speed limit and that police must at least be comfortable carrying weapons.

The privilege accorded police is considerable even before you get to the discrepancies that appear when police are accused of crimes, like murdering unarmed Black men.

In light of what I’ve seen lately,[1] that comfort with weapons bothers me a lot. Because even to the extent that the police brass may warn against firing guns in the air to celebrate New Years,[2] what I have seen on the ground better reflects an affinity between cops and white supremacism.[3] And even if I excuse the displays of heavy artillery around Mon Valley, where Blacks make up a large portion of the population, I can’t fathom that round aimed directly at a high school (figure 1). 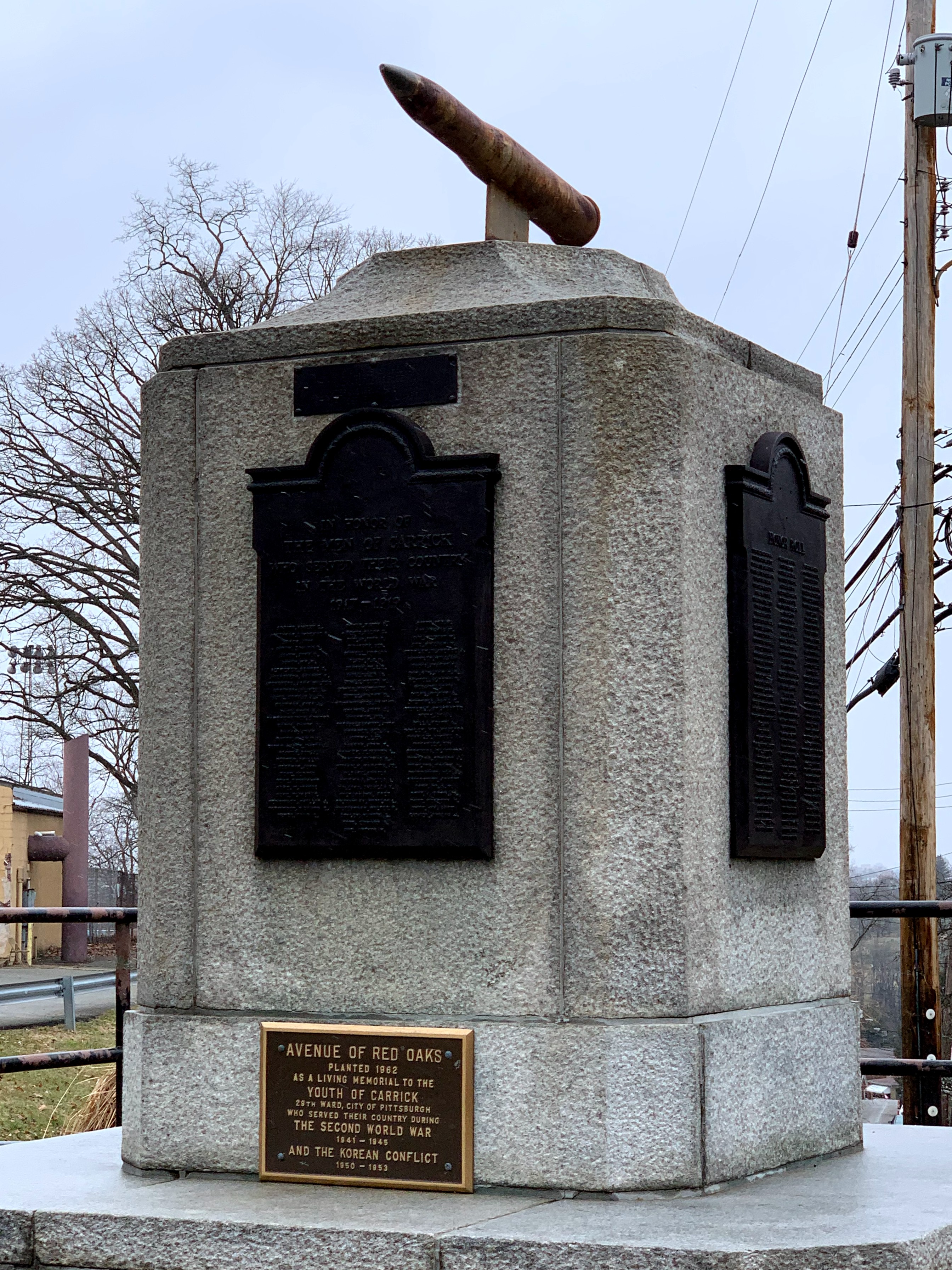 I can’t even care about the history of that memorial (figure 1) relative to that high school. The very fact that Pittsburgh would leave such an arrangement in place in a high school in a largely Black community speaks volumes.

The graffiti was interesting because it portrayed a binary between police and Black lives. Despite gentrification, Oakland continues to have a large Black population in its eastern, western, and northern quarters outside the downtown area and the East Bay hills. San Pablo Avenue is in the north. And Oakland has been riven by tensions between police and Blacks, most famously over the police shooting of Oscar Grant at the Fruitvale BART station in the east.

When you look for police bias, you’re likely to find it. Because police, almost never the brightest bulbs in the chandelier, are almost always biased. The literature I have points to race and class bias at every stage in the criminal injustice system,[4] the intersection between race and class is wide,[5] and it seems we spend entirely too much time refusing to look for racial bias despite evidence from, for examples, Philadelphia[6] and now, California.[7]

As a human scientist, I attach weight to the narratives of those who tell them: Our basic question often is, what is or was your experience with (fill in the blank)? And what I’ve found since coming to Pittsburgh is that with the exception of those few who’ve bought into Black-on-Black crime narratives,[8] the Black experience of policing is pretty commonly of severe intimidation. Those red lights in their rear-view mirrors portend possible arrest (whether on legitimate or contrived grounds), injury, or death. To get off with just a ticket is to be fortunate, even if that much poorer, even if that much more hassled.

And around here, I see a lot more “Blue Lives Matter” flags and signs expressing support for cops than I see “Black Lives Matter” banners. Which is to say that Black lives continue to be treated as expendable. Pretty much what a tattoo artist told me (I paraphrase): From the time we arrive, he said, we are informed that we are here solely to serve the capitalist system.

Whites who would doubt him should do as I have done: Transport a few Blacks to visit inmates at the Allegheny County Jail. It’s too often routine for them, not exceptional. Yes, often those charged have been idiots of one sort or another. But it’s not enough to just call them idiots. You have to ask what social conditions produce the idiocy.

Something I noticed when I first got here is, perhaps most eloquently, but certainly not exclusively, with that tattoo artist, is that Blacks here often possess a critical consciousness of the sort recommended by Paulo Freire without ever having received the sort of critical education he developed[9] because this sort of education simply does not formally exist in the United States. That ought to tell you something. And it certainly isn’t that Blacks are idiots.

There is indeed a binary between “Black” and “Blue” lives. But that’s largely a decision made by armed cops, certainly not their too often unarmed victims.

2 thoughts on “The binary between “Black” and “Blue” Lives”