There is more to it, I think, even than this:

There is, indeed, a strong sense of grievance here [in Pittsburgh], especially among the boomer generation. There’s also a strong suspicion of authority figures that flares up at times like these when we’ve been asked to trust faraway experts to know what’s best for us [as with the COVID-19 lockdown].

The grievances have their roots in the industrialization of this valley—and the mistrust of authority figures is a direct result of the big bargain people here made—a deal that turned out to be a lie.

During most of the 20th Century, if you worked for our major industrial employers—companies such as US Steel, Jones & Laughlin, Westinghouse Electric or Union Switch & Signal—you knew they were poisoning our air and water, and you knew that you stood a decent chance of being injured or maimed on the job.

The bargain was that, with the protection of industrial trade unions, you were paid well, and when you retired, you had a pension waiting.

In the 1980s, we kept up our side, but US Steel diversified into oil refining and closed down much of its steel production, Westinghouse Electric merged with CBS and exited manufacturing altogether, Union Switch & Signal went overseas, and Jones & Laughlin (by then known as LTV) imploded after two bankruptcies. Pension plans were liquidated for pennies on the dollar or bailed out by the federal government.

Corporate America left Western Pennsylvania a toxic mess, both literally and figuratively, and stripped away our livelihoods and identities. Of course we’re bitter.

When that crash hit, those who could moved away. Those who couldn’t tended to be mid-career Baby Boomers with mortgaged houses that suddenly couldn’t be sold at any price. Those folks are now in their 60s, 70s and 80s, and many of them still very, very aggrieved.

Some of them found solace in their churches or by becoming super-nostalgic for the “lost America” that Ronald Reagan told us had been destroyed by “unions” and “minorities” and “welfare queens.”[1]

Jason Togyer, who wrote that, is apparently “a lifelong resident of the Monongahela River valley area of Pittsburgh.”[2] I am, on the other hand, relatively new to Pittsburgh and I now live just outside what locals uniformly call “Mon Valley.” While I lived in Mount Lebanon for a couple years as a kid, by far the bulk of my life has been in California. The farthest I lived from San Francisco in that time was Reno, Nevada, and Selma, California, the latter about fifteen miles south of Fresno.

But my grandfather was one of those whose pension was impacted when Jones and Laughlin Steel imploded and a lot of the year since I moved here has been spent coming to terms with who my grandparents were, who I am, and with seeing how very different Pittsburgh really is from, well, Mount Lebanon, as I remember it from my childhood, and Dormont, where my grandparents lived (I could walk to their house and those of a few other relatives).

Coming back, I have noticed first the racism, even white supremacism, directed principally at Blacks and Jews.[3]

There is, of course, much more. A little bit downstream the Monongahela River from McKeesport, the focus of Togyer’s writing, West Homestead, Homestead, and Munhall have banded together to call themselves “Steel Valley,” a reference to a past that is now long gone. Across the river from “Steel Valley,” just outside Rankin, is the Carrie Blast Furnaces National Historic Landmark, which is remarkably desolate for an urban location. A little bit upstream but on the same side as the Carrie Blast Furnaces, and directly across from the Kennywood Amusement Park, U.S. Steel still has the Edgar Thomson Works in an area near the boundaries between North Braddock, Braddock, and East Pittsburgh. I don’t know the demographics of the U.S. Steel workforce but all of these towns have high proportions of Blacks among their populations. By contrast, the effigy of a burly steelworker, bending a rod with his bare hands, that stands by Gate No. 2 (figure 1) appears to be that of a white man. 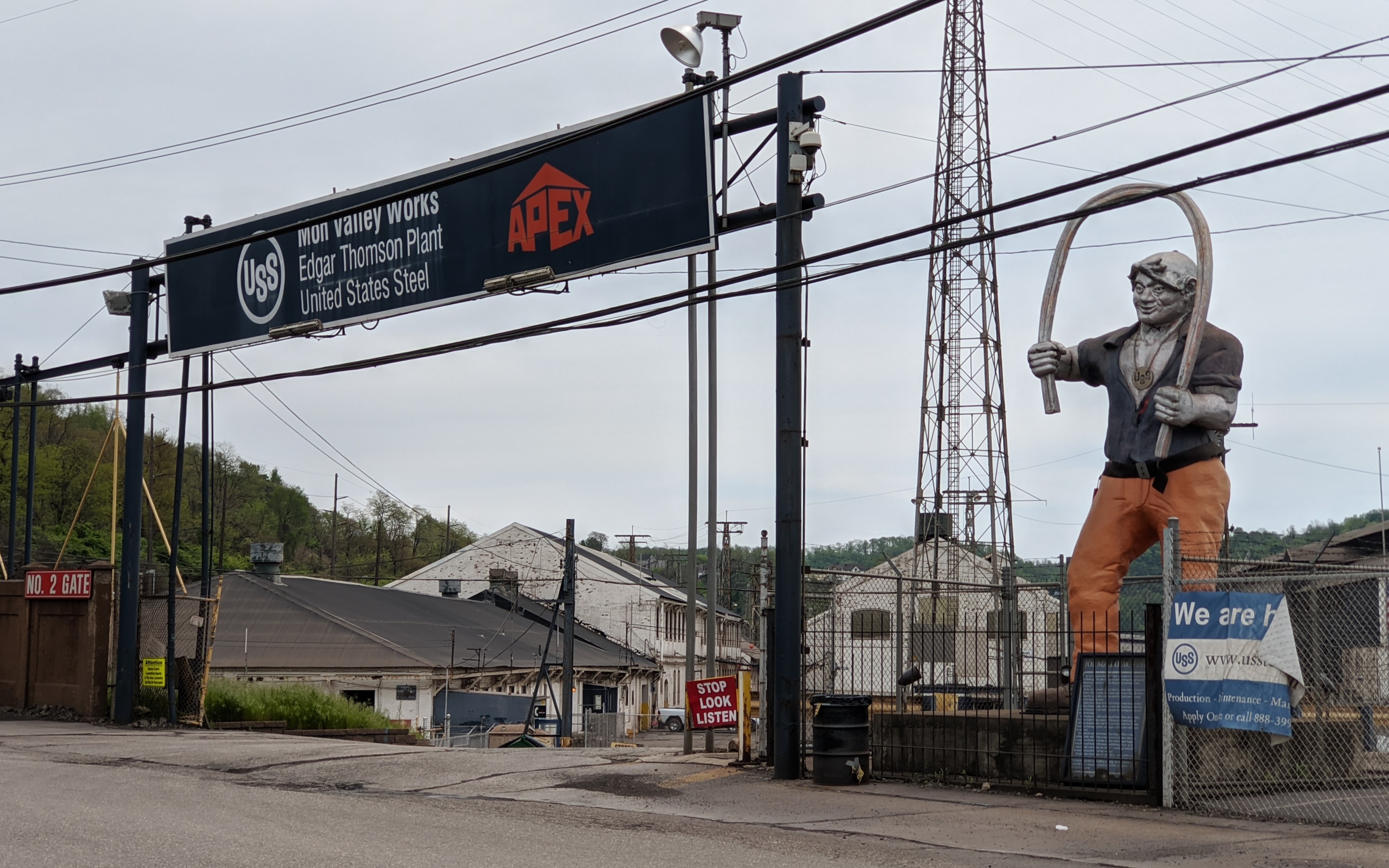 Fig. 1. Gate No. 2 at the Edgar Thomson Works of U.S. Steel in Braddock or North Braddock. I interpret the effigy as being of a white man due to the hair, with a prominent wave atop his forehead, which is not so visible from the angle in this image. Photograph by author, May 16, 2020.

That dissonance appears in other places as well, in the ubiquitous German street names, the ethnic European social clubs (example, figure 2) and the restaurants, and the Eastern Orthodox churches (examples, figures 3-6) that dot many towns with prominent Black populations. 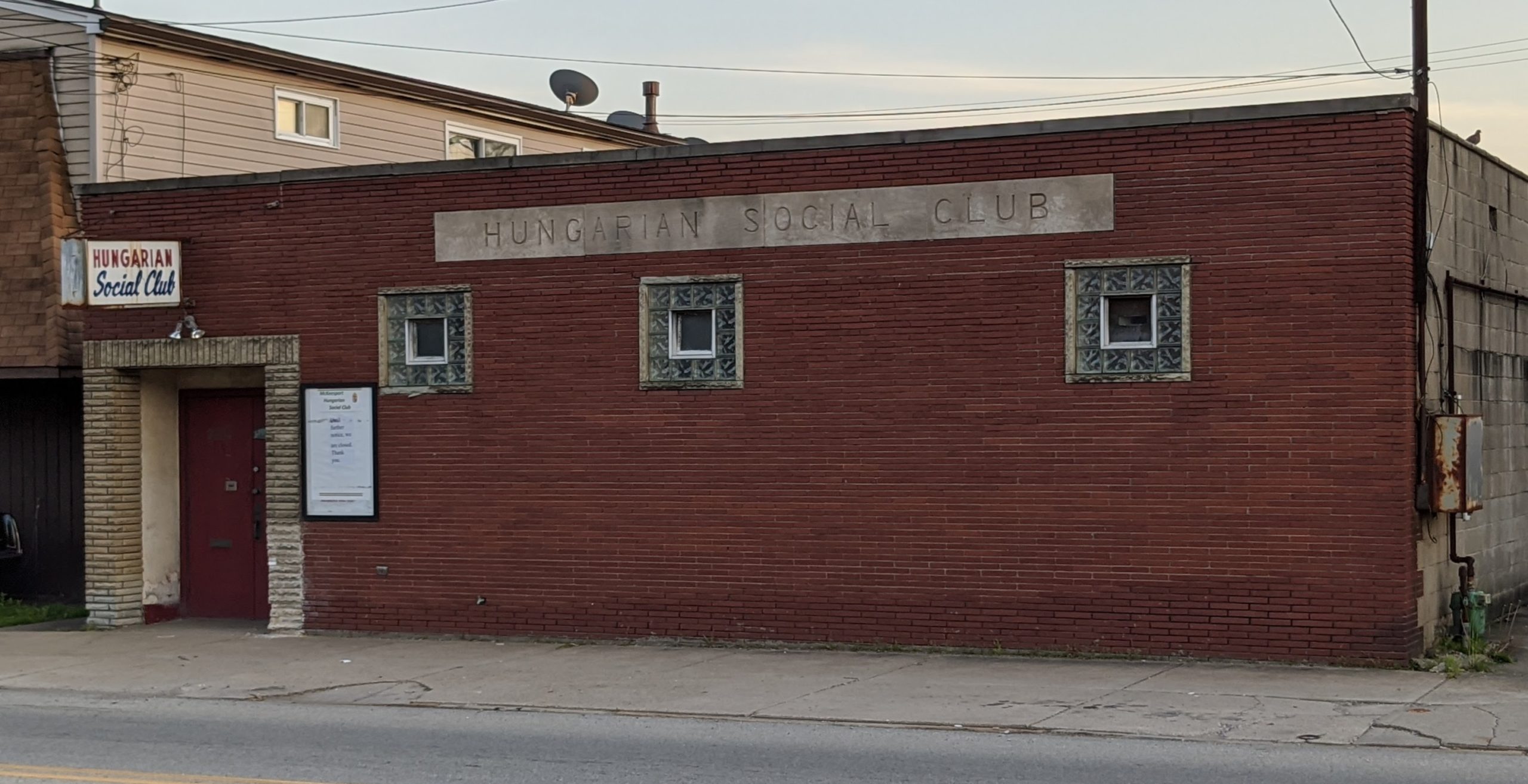 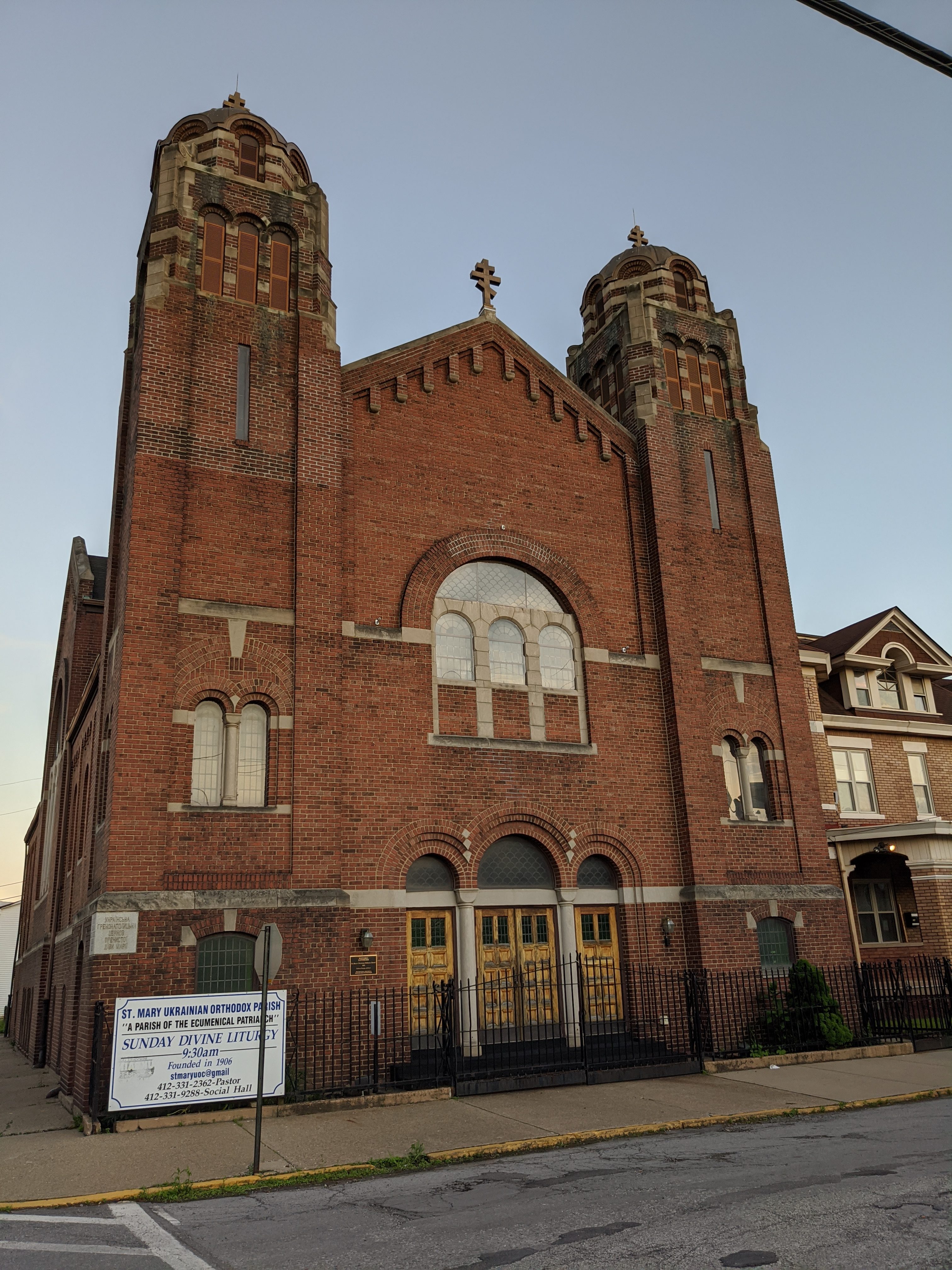 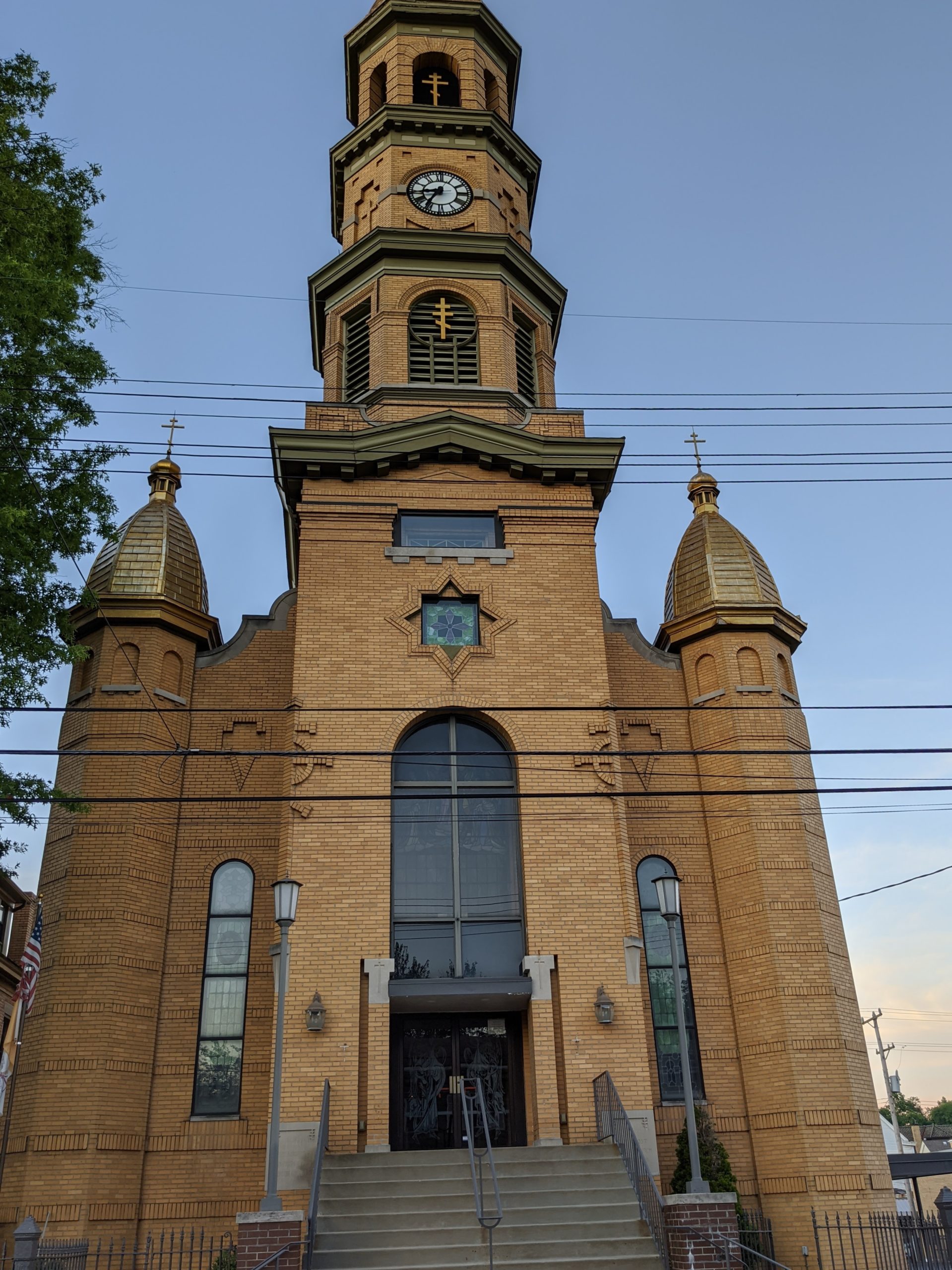 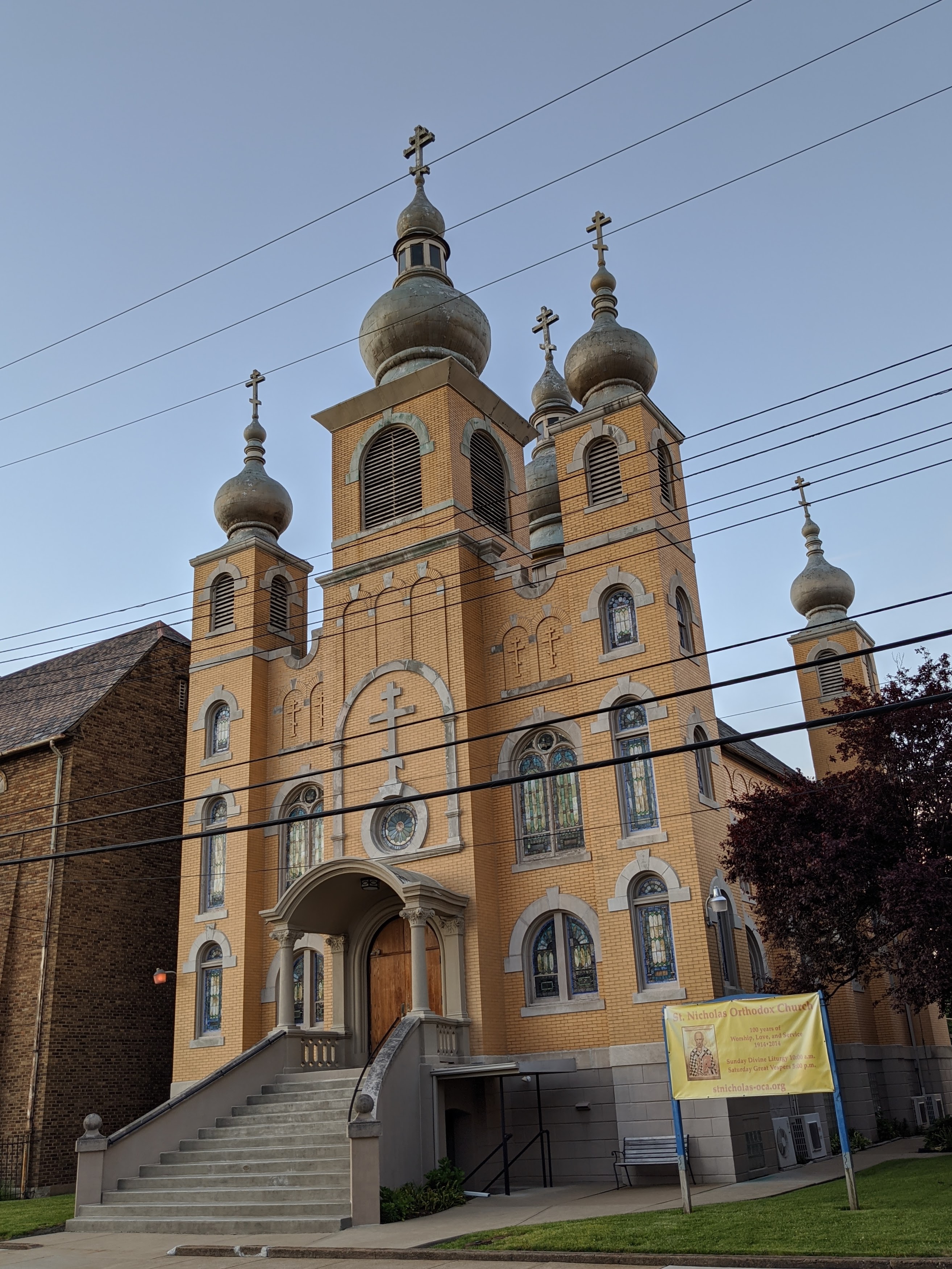 It’s May and the banners celebrating military veterans[4] are going up around Pittsburgh. So far, each and every one I’ve seen this year has been of a white. Last year, I found very, very few commemorating Blacks—I had seen thousands of these banners, but maybe only about a dozen, certainly less than twenty, of Blacks.

I interpret these “ethnic remnants,” given their locations in areas now so heavily populated by Blacks, as signs that the demographic make-up of these areas may have shifted in line with what Ta-Nehisi Coates explains of redlining, a now-illegal practice of making mortgages more expensive or difficult to obtain in neighborhoods where stigmatized minorities begin moving in, devaluing the properties in those neighborhoods.[5] It is difficult otherwise, for example, to explain the presence of three Eastern Orthodox churches all within a couple blocks of each other in McKees Rocks (a different town from McKeesport).

It’s one thing to celebrate ethnic identity. It’s another when a prominent identity is all but excluded. American Indians, whose territory this was, as the British fought the French for control of the Ohio River and navigable access that reaches the Gulf of Mexico in a war whose cost and the taxes levied to pay for it were major factors leading to the Amerikkkan Revolution,[6] are absent as well. I also notice more confrontational ethnic markers (figure 7). 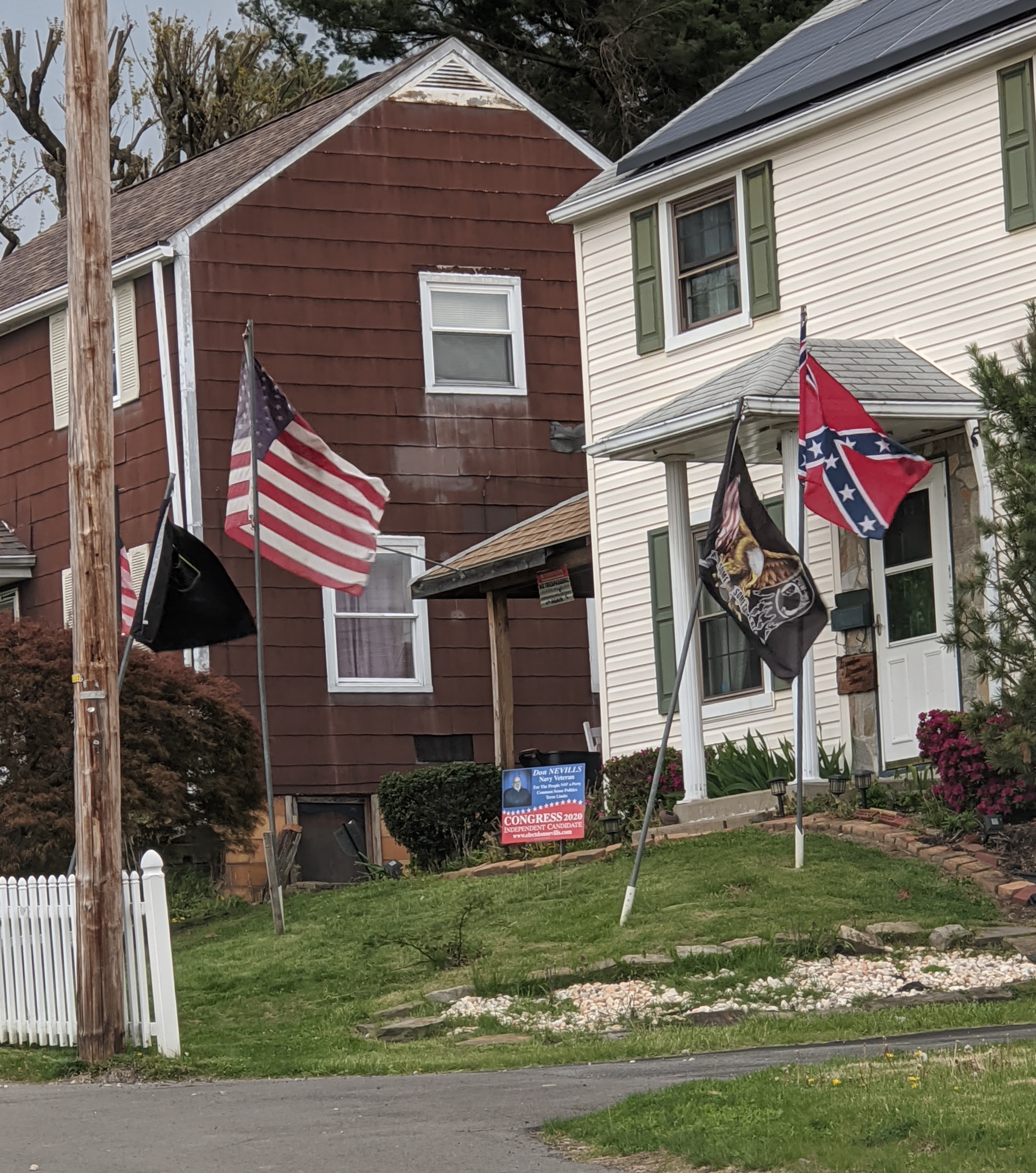 Fig. 7. This house in Clairton has five flags in front, including a Betsy Ross flag hidden behind the telephone pole. Two are U.S. Army flags. One is a Confederate flag. Photograph by author, April 29, 2020.

Flags, posters, and bumper stickers are also commonly to be seen supporting Donald Trump’s reelection, perhaps a little less so since his catastrophic mishandling of the COVID-19 pandemic.[7] Also common are Gadsden (“Don’t Tread On Me”) flags and flags supporting Blue Lives Matter (in binary opposition to Black Lives Matter[8]). And I can’t help but associate all this with the gun nuttery, particularly when so many guns are gratuitously displayed in areas where Blacks live in large numbers.[9] I think Barack Obama, who was wrong on so much, was right when he said,

And it’s not surprising then they get bitter, they cling to guns or religion or antipathy toward people who aren’t like them or anti-immigrant sentiment or anti-trade sentiment as a way to explain their frustrations.[10]

Except that these aren’t just small towns, unless you think Pittsburgh is a small town.

For me, the over-the-top patriotism of a sort that makes me wonder what the flag-wavers are compensating for, the guns, and the white supremacism are indeed all part of a vicious package, an identity that some whites perceive as under siege. They cling to their flags, their guns, their intolerant form of Christianity, and their whiteness,[11] as they have lost their jobs[12] and live with the decay that is everywhere to be seen (figures 8 through 11). We might call it post-industrial, but post-apocalyptic seems more appropriate. 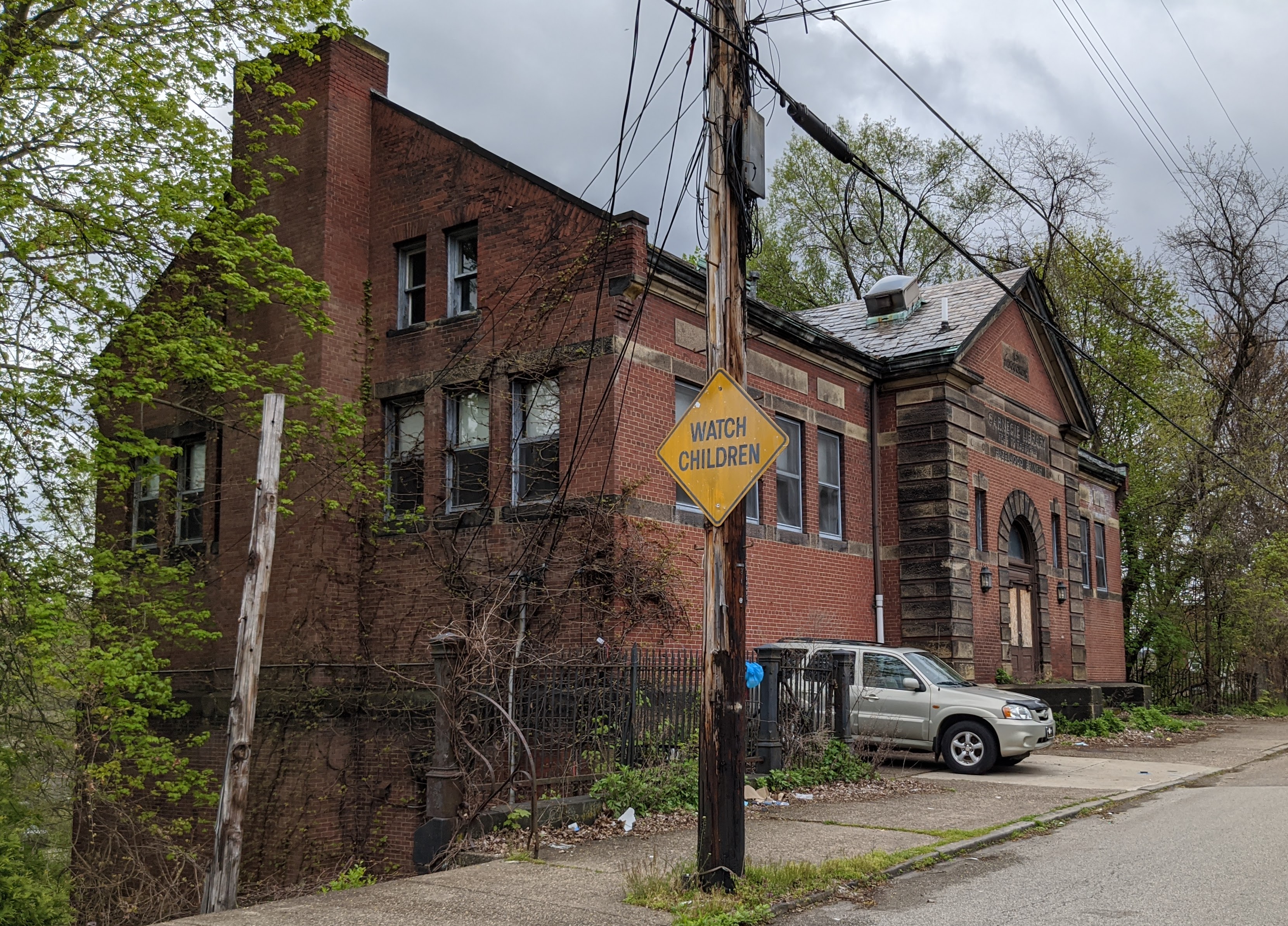 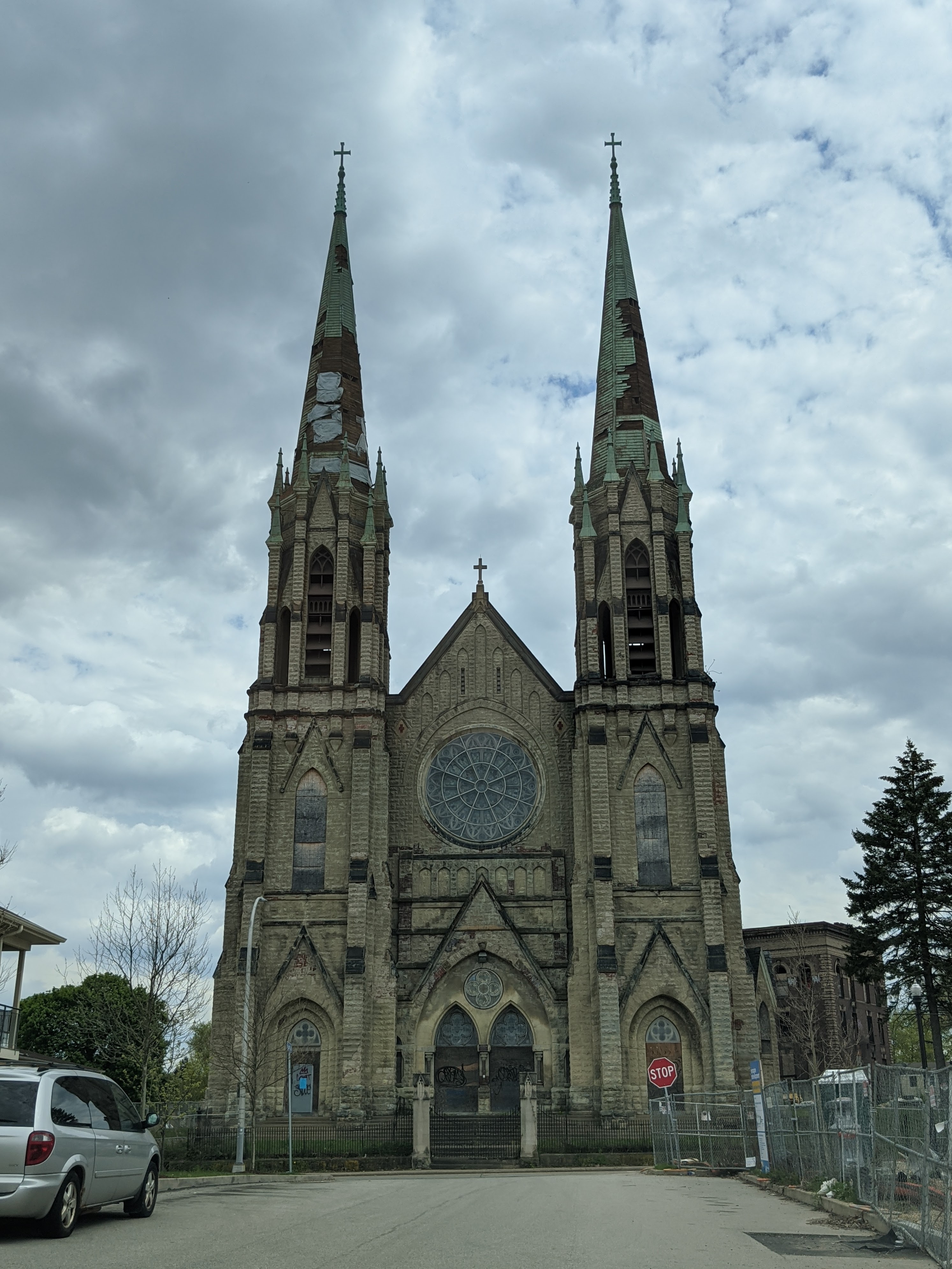 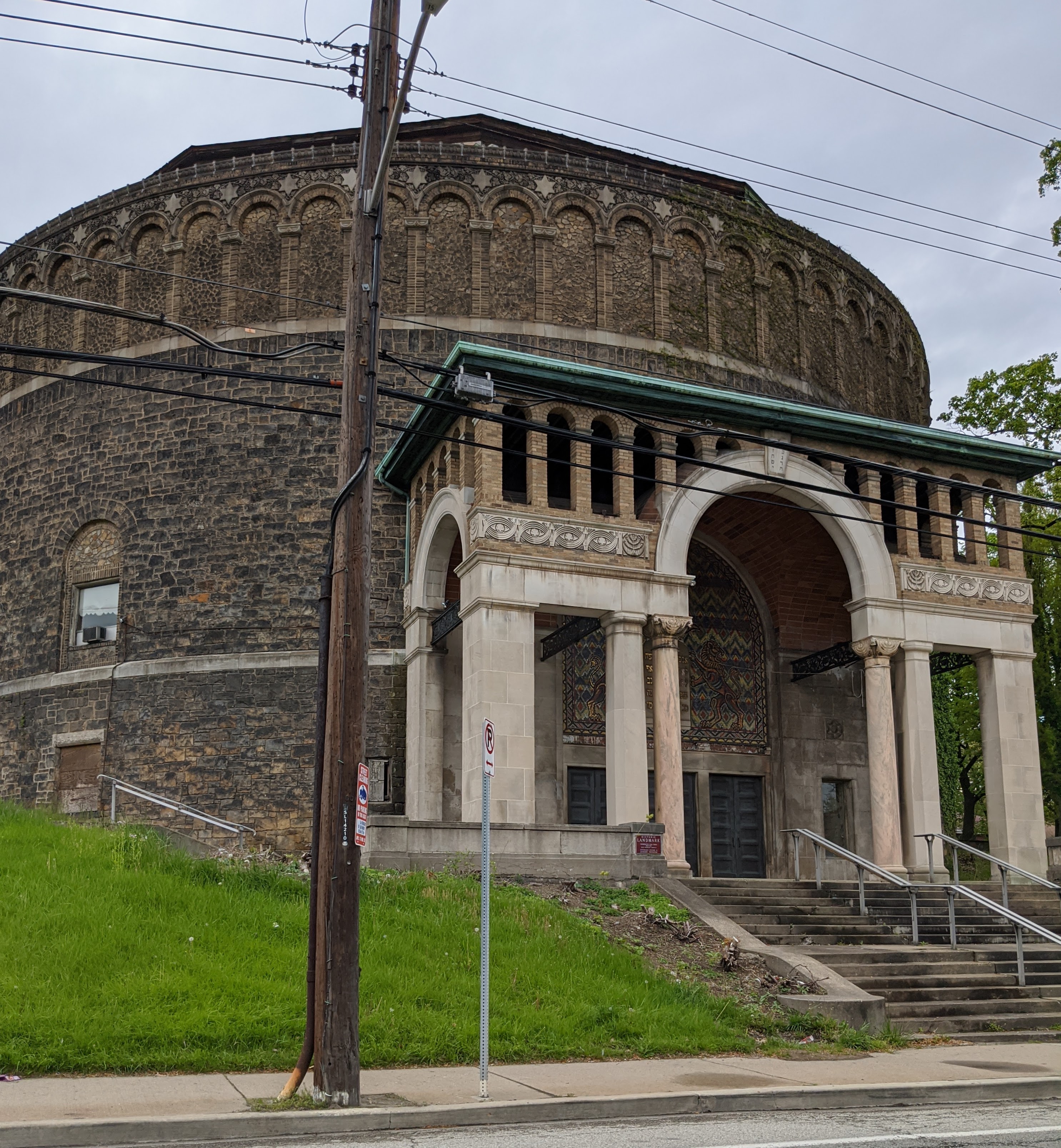 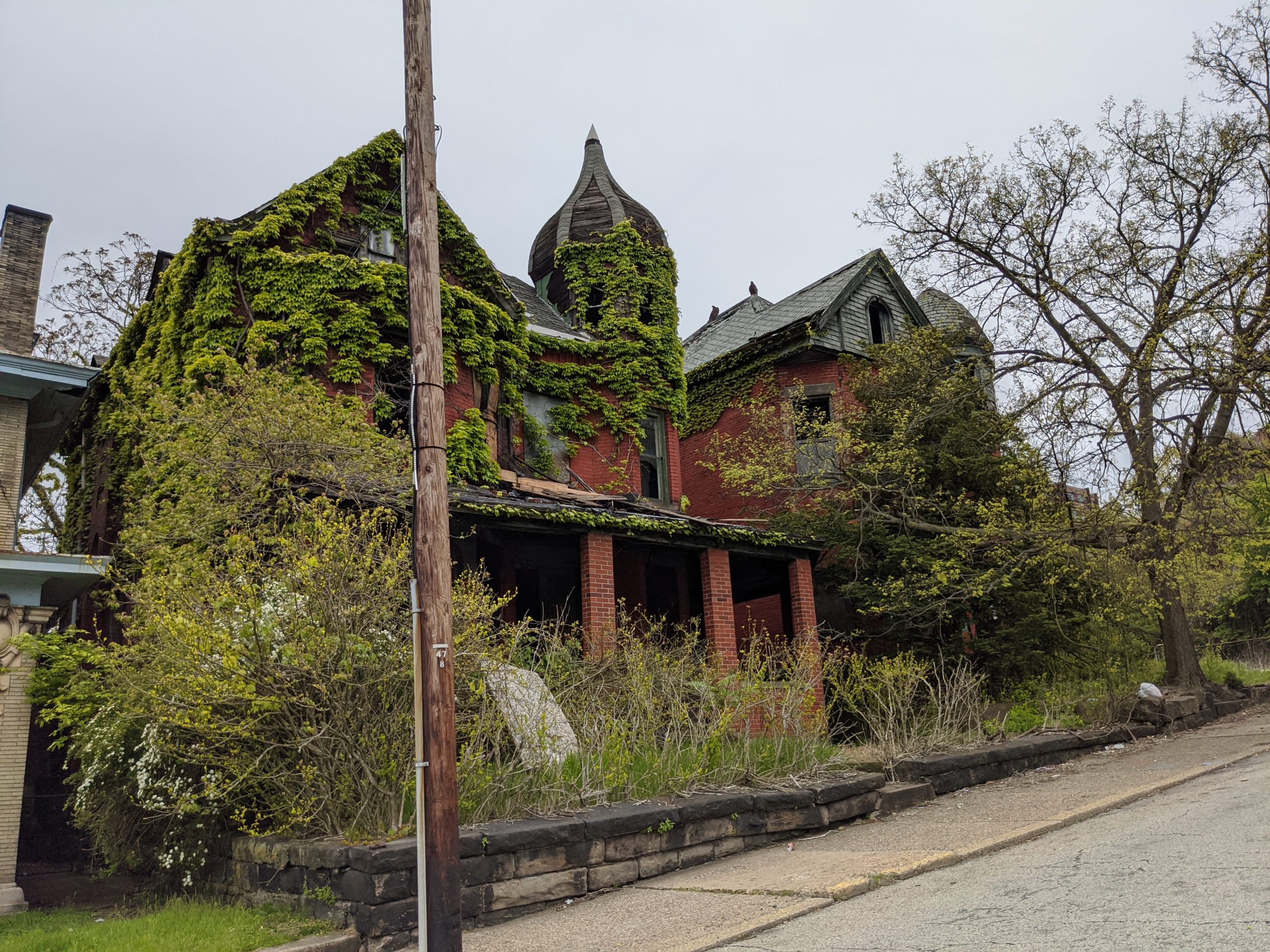 The perception that white identity is under siege is a hallmark of paleoconservatism, a tendency of conservatism that includes neo-Nazism and white supremacism.[13] And it is this expression of identity that has horrified me since I arrived here.

The trouble with that perception is that it is far from whites alone who suffer. In Pittsburgh, poverty is most starkly associated with race and, specifically, with discrimination.[14] Blacks, too, have suffered from post-industrialization and for miles around Clairton, and they suffer the air pollution from a remnant that remains, at the Clairton Coke Works, also owned by U.S. Steel.[15] (I have heard nothing about pollution from the Edgar Thomson plant, although it is every bit as unsightly.) Blacks, largely, live with the blight of U.S. Steel plants ironically bearing markings promising “Continuous Improvement To Environment (CITE).” And many of my Black passengers, certainly not just Baby Boomers, share the distrust of authority that Togyer describes.[16]

The identity that’s under siege is not an ethnic identity but one that shows up in all the markers and the remnants of that industrial heritage, principally steel manufacturing. Whatever the story behind that effigy in figure 1, white supremacists appropriate that heritage.

Update, May 29, 2020: I have gotten photographs of the three Eastern Orthodox churches in McKees Rocks (figures 4 through 6) I mentioned in this post. Subsequent figures have been renumbered. All churches are now identified by name.

Also my mother, who grew up in Pittsburgh, understands the influx of Central, Eastern, and Southern Europeans to Pittsburgh to have occurred in the 19th century. This mostly would be the second great wave of that century and it extended into the early 20th century. Significantly, these migrants were often darker skinned than the northern Europeans who had arrived earlier in the 19th century, not Protestant, and, at least as a first language, non-English speaking. I understand their arrival, in combination with Reconstruction Era constitutional amendments that freed slaves, granted all men the vote, and sought to ensure equal protection under law, to be part of the story of evangelical Protestantism, the anti-abortion movement, and white supremacy in the U.S.[17]

Finally, I now have a page on Pittsburgh where I organize and accumulate the evidence.

Update May 30, 2020: I have updated the text to reflect the previous update (May 29, 2020) and also added more information to the caption for figure 3. In the text, I note that McKees Rocks has three orthodox churches within a couple blocks of each other. A similar situation really also exists in McKeesport, albeit over a slightly larger area.

Update, November 13, 2020: The Federal Bureau of Investigation says Pittsburgh is a “hub” for white supremacism, including, possibly, violent white supremacism. The FBI is limited in its investigations because much of the activity is talk—speech, protected by the First Amendment—and not actually criminal.[18]

5 thoughts on “Pittsburgh, race, and a threat to appropriated identity”