It might be touching to see the faith so many municipalities are placing in their local police to contain any militia activity threatening the 2020 election,[1] such as I (and others[2]) have warned about,[3] if police could even remotely be considered neutral. END_OF_DOCUMENT_TOKEN_TO_BE_REPLACED

A while ago, I tried looking into a prevailing assumption that the United Kingdom’s Labour Party was anti-Semitic. I couldn’t find any substantive evidence of what seemed to be a widely-shared assumption.[1] So as near as I could tell there was nothing more to it than a general neoconservative equation of any criticism whatsoever, no matter how mild, of Israel’s policies in the Occupied Territories,[2] let alone of the genocide[3] of Palestinians,[4] to anti-Semitism. END_OF_DOCUMENT_TOKEN_TO_BE_REPLACED

Since I’ve arrived in Pittsburgh, with all the Confederate flags, the gratuitously displayed guns in areas where Black and white working class and poor are in evident conflict, the banners that mysteriously celebrate so few Black veterans but plenty of white ones, the thin blue line flags,[1] the cop who let his dog bark viciously and uncontrollably at a Black man who was merely walking across a parking lot,[2] and all the reports of racism and white supremacism[3] I’ve also noticed aggressive driving,[4] particularly by drivers of monster pickup trucks, that I quickly dubbed “testosterone trucks,” hence the inspiration for the sign (soon to be a sticker—I’ve finally ordered it—figure 1) in my car’s back window that says, “Keep Your Testosterone Off My Tail.” END_OF_DOCUMENT_TOKEN_TO_BE_REPLACED

David Salisbury has written an article on what a potential COVID-19 vaccine does for us. It’s oriented towards the United Kingdom, but his principles apply in the U.S. as well.[1] In essence, the U.S. Food and Drug Administration has said it will accept COVID-19 vaccines with 50 percent efficacy, possibly lower in practice,[2], meaning they need be effective in protecting 50 percent (or less) people who receive it. You have to multiply this effectiveness rate by the proportion of the population inoculated to determine what proportion of the population will be protected. And because of that effectiveness rate, we won’t know for sure who among the inoculated will indeed be immune.[3] In particular, we should worry about how effective a vaccine will be among the elderly.[4] END_OF_DOCUMENT_TOKEN_TO_BE_REPLACED

Deploying an “excess deaths” methodology, the Centers for Disease Control and Prevention attributes an estimated 299,028 deaths to COVID-19. Yes, there’s a chance that other, unidentified, causes resulted in a higher overall death toll this year than last, but such factors might also reduce the toll. The larger part of the difference between this number,[1] and the official toll, 220,987,[2] is likely in undiagnosed cases and deaths indirectly attributable to the disease.[3] I’ve been watching the “excess deaths” number for a while[4] because it is likely closer to a complete picture. Quoting at length, here are the very ugly numbers: END_OF_DOCUMENT_TOKEN_TO_BE_REPLACED

I woke up this morning to the sound of frost melting into the roof gutter on my building. Fall has turned cold in Pittsburgh and though it was a beautiful fall (we’re past peak now), my thoughts turned to the homeless. As I wonder about the two (out of six) vacant apartments in my building (in a massive complex).

I had never gotten used to seeing the homeless encampments in the San Francisco Bay Area, where they were, especially around Oakland, often the size of small villages. When I arrived in Pittsburgh, I saw not as many homeless people, but still some. Last winter was remarkably mild, but winters here are much harsher. I wonder how people survive. And this year, in a pandemic, where homeless people are among the populations considered additionally vulnerable,[1] I’m seeing more homeless people. And then I see something like this: END_OF_DOCUMENT_TOKEN_TO_BE_REPLACED

Kamala Harris did what she’s famous for, in this case, exposing Amy Coney Barrett as disingenuous on some claims of impartiality on abortion rights and Obamacare.[1] END_OF_DOCUMENT_TOKEN_TO_BE_REPLACED

It’s already well established that the U.S. government has egregiously mishandled the COVID-19 pandemic politically, economically (also enabling capitalist greed to compound the problem),[1] and medically,[2] with devastating consequences. In addition to all that, Donald Trump recklessly recommended absurdly dangerous non-remedies like hydroxychloroquine[3] and injecting or ingesting bleach.[4] There’s no excuse for any of it and now the New England Journal of Medicine says so, noting in its conclusion that “[a]nyone else who recklessly squandered lives and money in this way would be suffering legal consequences.”[5] END_OF_DOCUMENT_TOKEN_TO_BE_REPLACED

I was out early this morning, first for an oil change, and second to pick up my laundry. On my way back from the latter, there at the top of the hill on McNeilly Avenue at Pioneer Avenue was a Joe Biden campaign sign, calling for “Unity Over Division,” somewhat like the one in figure 1. 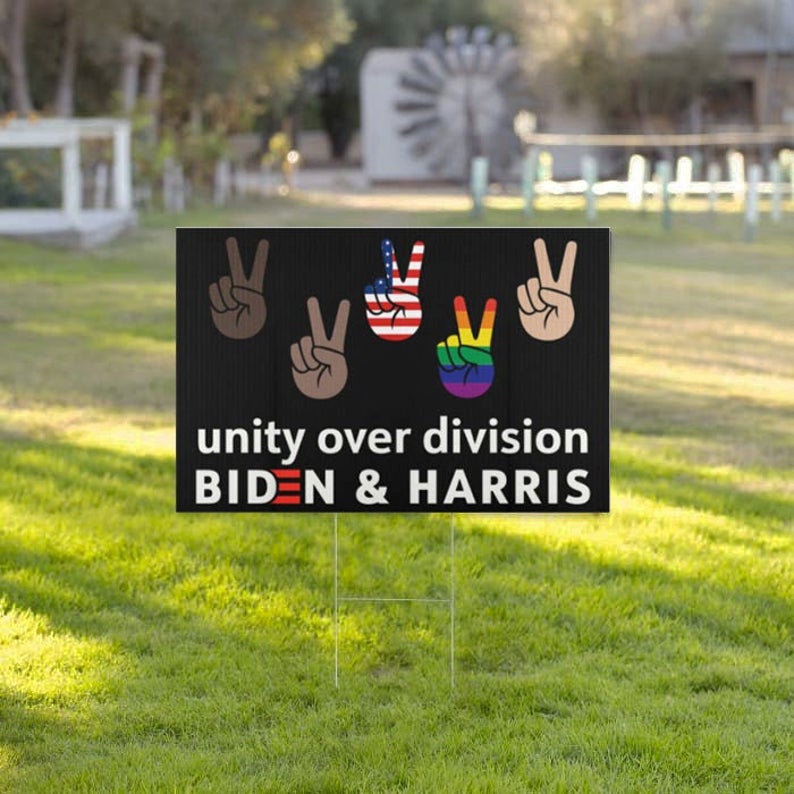 I was driving so I could not enact my emotions of the moment. For me, this is beyond naïve and well into deceptive. END_OF_DOCUMENT_TOKEN_TO_BE_REPLACED

It motivated me to dredge up my old research journal entry on my analysis of the second amendment which, to say the least, is not the one that presently prevails, especially in Pennsylvania. When I go into the raw text of my old Drupal database dump, I don’t know the date the entry was created, nor do I know the original title. But in this case, I see there’s an update, which I’ve moved to the end of the post. The entry, as resurrected, follows.

In the wake of yet another mass shooting,[2] I will here run where angels fear to tread, into an analysis of the wording of the second amendment. First, the text itself: