It motivated me to dredge up my old research journal entry on my analysis of the second amendment which, to say the least, is not the one that presently prevails, especially in Pennsylvania. When I go into the raw text of my old Drupal database dump, I don’t know the date the entry was created, nor do I know the original title. But in this case, I see there’s an update. The entry, as resurrected, follows.

Update, June 16, 2016: Since writing this post, I have learned that the late Chief Justice Warren Burger offered a similar view, saying “that the Second Amendment ‘has been the subject of one of the greatest pieces of fraud—I repeat the word “fraud”—on the American public by special interest groups that I have ever seen in my lifetime.'” I have not located a transcript to confirm the full text in the meme; apparently he said it on the MacNeil/Lehrer NewsHour in 1991[2] and was allegedly “expressing the longtime consensus of historians and judges across the political spectrum.”[3] 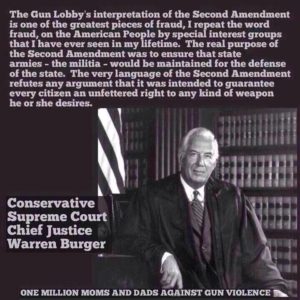 In the wake of yet another mass shooting,[4] I will here run where angels fear to tread, into an analysis of the wording of the second amendment. First, the text itself:

Even the grammar in this sucks. There is an inappropriate comma following the phrase “keep and bear arms.” But we can divide the sentence into two portions, a rationale (“prefatory”) and a directive (“operative”). This division is important: As the Supreme Court noted in the Heller decision, the stated rationale need not necessarily be the only rationale, so the directive may apply even if the rationale does not.[5] The directive here is that “the right of the people to keep and bear arms, shall not be infringed.” Gun advocates shouldn’t jump to premature conclusions here; I’ll return to why, the Heller decision notwithstanding, the stated rationale assumes extraordinary importance.

There are two huge problems with the directive. First, it refers to “the right of the people.” This does not confer an individual right but rather a group right to the people. The trouble is that we don’t really know who is meant by the people. It is not clear in this phrasing that the people are distinct from, let alone in opposition to, the government. As an anarchist, I don’t really accept that the government acts as a proxy for the people, but this is a foundational document for a government that does indeed claim to act in the name of the people. Notably, in Heller, the Court does make the leap of assuming that “the people” refers to individuals.[6]

Second, when we say the people, whoever they are, have a right “to keep and bear arms,” we aren’t saying which arms. This is an important point. Weapons technology has progressed since the late 18th century. Muskets are hard to come by but in the Heller decision, the Supreme Court went to great lengths to discern what the traditional right to bear arms was.[7] So we either take the Heller logic to its logical extreme and say the people have the right to weapons as they existed in the late 18th century or we are forced to acknowledge that any limitation on the right to bear any arms, up to and including the most horrific weapons known to humanity, is in fact an infringement.

Neither of those interpretations is tenable. Limiting the right to late-18th century weapons might be even more dangerous than the status quo if we were to set aside an entire consumer safety regime so they could be manufactured and sold as consumer products. And the prospect of that kid a couple doors down having access to a nuclear bomb just because his parents could afford one isn’t reasonable either. In Heller, the Supreme Court notes that the right conferred by the second amendment is not unlimited,[8] but any line we draw between muskets and nuclear weapons will be arbitrary.

That forces us to return to the first question of who the people are and since that is unclear, we are forced to return to the rationale for any available clues. This is “[a] well regulated militia, being necessary to the security of a free state.” Again there are horrendous problems. First, what do we mean by “the security of a free state?” Can in fact the United States be construed as a “free state?” Less plausibly, does this in fact refer to individual states?

I’m afraid it might. Because third, what the fuck do we mean by militia? I think a lot of pro-gun people rely on a selective reading of the dictionary. Here’s what the dict command on UNIX-like systems returns:

Pro-gun folks seem to think—and in Heller, the Supreme Court agreed[9]—that militia means, from the Webster’s definition above,

the whole military force of a nation, including both those engaged in military service as a business, and those competent and available for such service; specifically, the body of citizens [traditionally able-bodied males] enrolled for military instruction and discipline, but not subject to be called into actual service except in emergencies.

Article I, Section 8 of the Constitution, however, offers a different understanding. In part, it assigns to Congress authority:

To provide for calling forth the militia to execute the laws of the union, suppress insurrections and repel invasions;

To provide for organizing, arming, and disciplining, the militia, and for governing such part of them as may be employed in the service of the United States, reserving to the states respectively, the appointment of the officers, and the authority of training the militia according to the discipline prescribed by Congress;

This does two things. First, it fleshes out the rationale in the second amendment. Second, it compels that horrible interpretation, first, that indeed the militia are meant to enforce the will of the elite; and second, that what we mean by militia sounds a lot more like a national guard than it does every able-bodied male. In this interpretation, the people in fact means their government in concert with that something like a national guard that the U.S. Congress organizes, which may indeed possess even the most horrible weapons known to humanity. It clearly does not envision folks out in the woods preparing to form that final counterbalance to an overbearing government’s abuse of authority.

As an anarchist, I can’t say I like this even one little bit. First, while these days I try to avoid situations where I might even conceivably need a gun, I have an instinct that some day I just might need one. Second, in a horribly unjust social situation, the only way I see to dislodge the elites is at the point of a gun. But I don’t think that’s the rationale behind the second amendment.

Update, October 5, 2020: Since writing what was originally a research journal entry above, I have become increasingly skeptical about humans’ ability to embrace an anarchist ideal owing to the damage done by authoritarian systems of social organization since the neolithic.[10] This is a problem since I still think this is the only system of social organization that can be just.

But anarchism requires that people embrace justice when we have, for thousands of years, taught people to be self-centered, to “look out for number one,” to try to climb a ladder of wealth and power even when it is very nearly impossible to do so.[11] It in essence requires us to “grow up” as a species, to recognize and emphasize a value of cooperation even as social inequality widens, people on the wrong side of that inequality become ever more desperate even to survive, and people on the “right” side of that inequality display ever more determination to protect their own prosperity, privileges, and power over the rest of the population,[12] even as elites’ inability or unwillingness to confront even existential threats to human survival become ever more evident.[13] As I’ve written in another post,

I’m still not seeing how we survive the present crises, namely a pandemic, a recession that threatens to turn into a depression, and economic and racial injustice, let alone the climate crisis, short of a revolution. The elites will not go peacefully. I’m not a fan of violent revolution; I see it as replacing one set of thugs with another. But these elites are clearly not up to the challenge and I’m just not seeing an alternative.[14][15]

The needs 1) for the revolution I allude to in the original research journal entry while 2) not replicating the error of replacing one set of thugs with another, have never been more evident than at the present. And we may very well need guns. But we shouldn’t imagine, despite the stupidity of the courts, that the second amendment guarantees a right to those weapons.

8 thoughts on “Deconstructing the second amendment”