I’m not sure I’ve ever seen anything on Twitter that hits the nail on the head more than this:

A lot of my disagreements with liberals or conservatives basically comes down to this pic.twitter.com/gAOuUIScHH 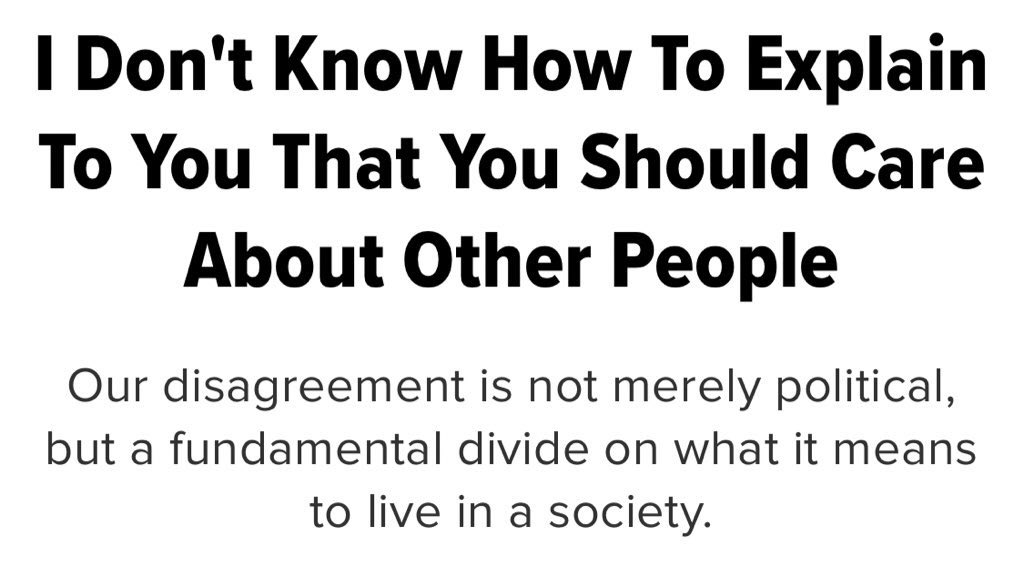 The question approaches that of psychopathy or sociopathy in which

People like this [with antisocial personality disorder] have a poor inner sense of right and wrong. They also can’t seem to understand or share another person’s feelings. . . . Someone with this personality type sees others as objects he can use for his own benefit.[1]

Indeed, this is another reason for regarding capitalism as criminal,[2] as this economic ideology inherently reduces some human beings to means to others’ (the rich and powerful) ends.[3] END_OF_DOCUMENT_TOKEN_TO_BE_REPLACED

Over three weeks after the 2020 presidential election (on November 3), Donald Trump continues to allege electoral fraud even as he has failed to muster any evidence whatsoever to support his claims and the courts reject them.[1] He continues to pursue a failing, indeed flailing,[2] and predicted strategy of attempting to subvert the electoral college process.[3] END_OF_DOCUMENT_TOKEN_TO_BE_REPLACED

It’s all getting rather tiresome. When Democrats lose in a presidential race, particularly if they’ve won the popular vote, but not the electoral vote, they blame the electoral college. When Republicans lose, after doing everything they can to disenfranchise voters, they cry fraud. END_OF_DOCUMENT_TOKEN_TO_BE_REPLACED

A lot of people actually like capitalism, mainly because they think it can make them rich, and they see ‘freedom’—when you see this word, always, always, always, ask “for whom, to do what, to whom?”—in the power that relative wealth offers them over others. Accordingly, they believe “they should be ‘free’ to exploit workers and the environment for personal gain, externalizing the associated costs, and thus burdening society at large with the costs they incur but should not have to pay for.”[1] END_OF_DOCUMENT_TOKEN_TO_BE_REPLACED

The U.S. constitutional oligarchy[1] faces a threat that is probably unlike any in history.[2]

First, a bit of background: Any authoritarian system of social organization (yes, this includes the U.S. and most of the world) relies on the acquiescence of the mass population. This ‘legitimacy’ means that the government does not need so often to use force to impose its will.[3] To be clear, the violence remains implicit—indeed, Max Weber noted that sovereignty uniquely enables whoever holds it a ‘legitimate’ use of force[4]—and anarchists accordingly regard such rule as based on violence and illegitimate. END_OF_DOCUMENT_TOKEN_TO_BE_REPLACED

The Democrats don’t care about the poor and, Mike Davis argues in the London Review of Books, it showed up in the election results from, among other places, the Rio Grande Valley of Texas:[1]

As the fantasy of great gains in Texas dissipated, Democrats were stunned to discover that a high turnout had instead propelled a Trump surge along the border. In the three Rio Grande Valley counties (the agricultural corridor from Brownsville to Rio Grande City), which Clinton had carried by 39 per cent, Biden achieved a margin of only 15 per cent. More than half of the population of Starr County, an ancient battlefield of the Texas farmworkers’ movement, lives in poverty, yet Trump won 47 per cent of the vote there, an incredible gain of 28 points from 2016. Further up river he actually flipped 82 per cent Latino Val Verde County (county seat: Del Rio) and increased his vote in Maverick County (Eagle Pass) by 24 points and Webb County (Laredo) by 15 points. The Democratic congressman Vincente Gonzalez (McAllen) had to fight down to the wire to save the seat he won by 21 per cent in 2018. Even in El Paso, a hotbed of Democratic activism, Trump made a six point gain. Considering South Texas as a whole, the Democrats had great hopes of winning the 21st Congressional District, which connects San Antonio and Austin, as well as the 78 per cent Latino 23rd Congressional District, which is anchored in the western suburbs of San Antonio but encompasses a vast swathe of southwest Texas. In both cases, the Republicans won fairly easily.[2]

Albeit probably in part due to Barack Obama’s record as a neoliberal (these policies help propel northward migration[3]) and as “deporter-in-chief,”[4] Joe Biden couldn’t even get the Latinx vote in the river valley that divides the United States from Mexico. Even when Donald Trump and the Republicans have been relentless in their demonization of human beings from south of the border.[5] Even when Trump locked migrants and their kids up in concentration camps.[6] END_OF_DOCUMENT_TOKEN_TO_BE_REPLACED

I came into a fair amount of contact with the Stanford University campus and its students while driving cab in Palo Alto—this, on a weekly lease, was a way to keep myself in a vehicle while I was finishing my B.A. in Mass Communication at California State University, East Bay, in Hayward, across the Bay, and commuting over forty miles each way from the Santa Cruz Mountains in the South Bay. Palo Alto, you should know, is a very liberal, albeit very wealthy, area with pretensions to being progressive; the population there will largely be entirely comfortable with Barack Obama’s legacy and Joe Biden’s presidency. END_OF_DOCUMENT_TOKEN_TO_BE_REPLACED

With the Associated Press having called results in all but Alaska, Georgia, and North Carolina, it very much appears that Joe Biden has won the presidency.[1] Certainly the celebrations I saw yesterday (November 7) in Pittsburgh suggest that people think this black hole presidency is over. And I will set aside for now that, to borrow a fat-shaming colloquialism, the fat lady hasn’t sung, that is, that Donald Trump is still desperately attempting to cling to office and may yet attempt further nefarious schemes to do so.[2] END_OF_DOCUMENT_TOKEN_TO_BE_REPLACED

Rick Santorum on CNN literally saying "Democrats need to give Republicans, including Trump, time and space to work through their feelings about losing." #ElectionResults2020 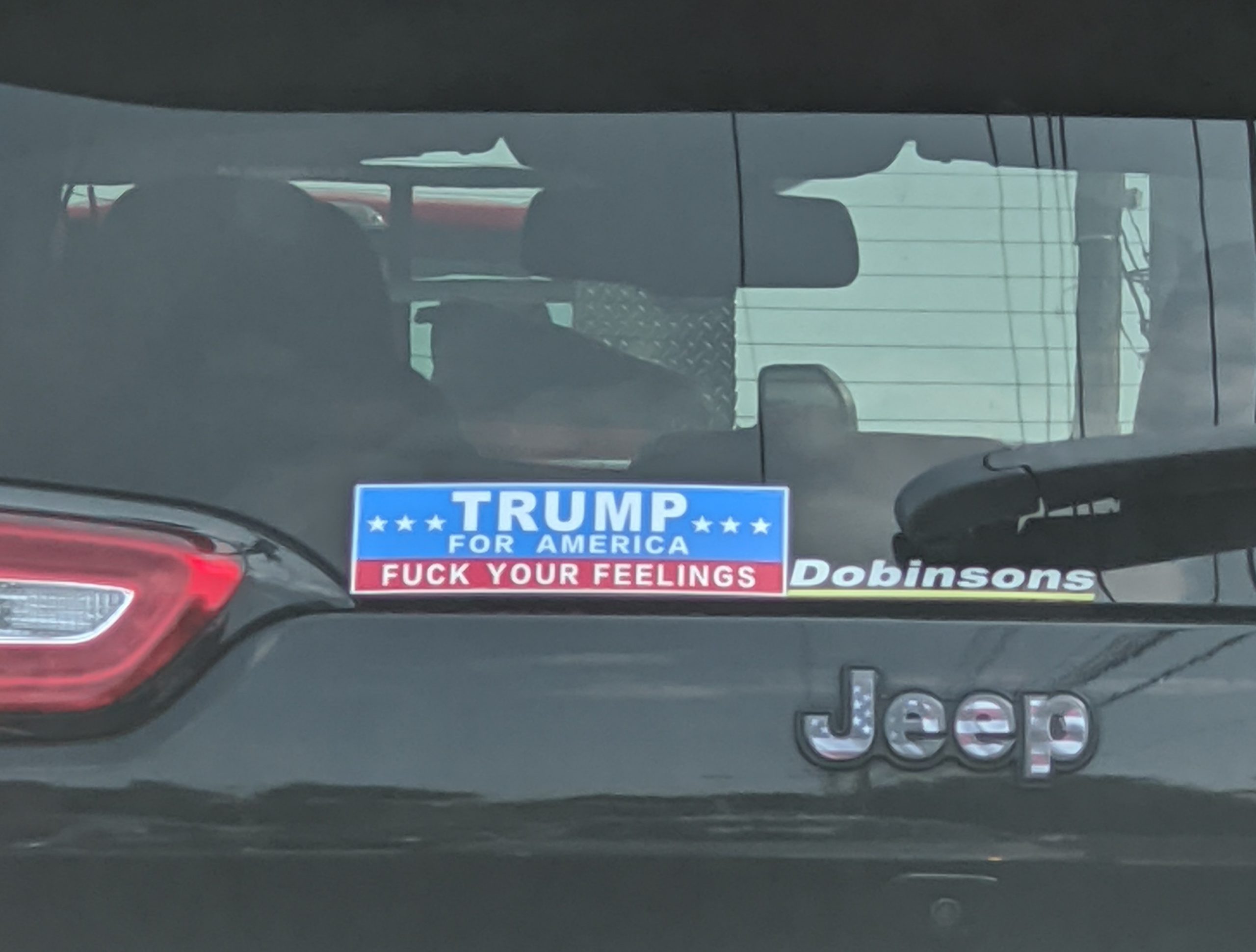