I remember seeing this argument during the dot-com boom:

YOUTUBE IS A PRIVATE COMPANY WHO CAN DENY THE *PRIVILEGE* OF BEING A USER OF ITS PLATFORM TO ANYBODY FOR ANY REASON OR NO REASON.

From a capitalist libertarian and legalistic perspective, it makes perfect sense.

The trouble is that there is at least one more way of looking at it. And this applies not just to YouTube, but to Twitter and Facebook as well.

Once upon a time the world had not been subdivided into individualistic private parcels of land the way it is today. There were common areas that were widely used for various purposes. Importantly, they were social: People could meet without trespassing, do business, be neighbors, discuss the events of the day, even hold protests.

This should sound quaint, but also oddly familiar: Today, the Internet largely serves this purpose. And it is an essential purpose to society.

Which makes the individualized private spaces of YouTube, Facebook, and Twitter problematic. Because at the very point that the author above affirms private property rights on the Internet, s/he is privatizing the modern commons. Which is the same thing that happened to the original commons.

Free speech rights may not apply de jure within privatized commons but that does not make those rights any less important.

So the advocates of property will naturally respond that this is a government and political function and not their responsibility. As is explicit in the Twitter post above. They insist upon this at the very same time they seek to eviscerate government because they object to government intrusions upon their “property rights.”

They call government a tyrant while they deny free speech rights on their own platforms. Which highlights the need for an independent space for speech. Government, after all, being a putative tyrant, cannot be trusted to protect rights to speech attacking its policies.

But the commons have been privatized. Which is to say, in effect, that you may only have free speech rights if you own the platform from which you would speak.

Imagine a commons where only the landlords could speak or stage a protest. And that is precisely where the logic of that tweet leads us.

Update, March 12, 2021: I have been wrestling with the paradox of so-called “free” speech for a while now:

Honestly, I’m still working on it.

Update, March 13, 2021: An article in the Columbia Journalism Review[1] reminded me of my own brush with Twitter’s artificial idiots, which were unleashed in the wake of Donald Trump’s inflammatory rhetoric which the company had officially tolerated[2] until his rhetoric led[3] to a coup attempt on the U.S. Capitol,[4] and it, along with other social media companies, didn’t.[5]

In my case I had commented on the difference between old and new designs for ceremonial keys to the City of Pittsburgh by noting that they were traditionally hung on lanyards around the honoree’s neck, something the newer design would not make possible. Twitter’s artificial idiots, I suspect, saw the words ‘hung’ and ‘neck’ and concluded that my tweet was abusive. My only appeal seems to have been to the very same artificial idiot.

Facebook’s approach has hardly been better, subjecting vast numbers of poorly paid folks to endless horrifying and utterly repugnant videos, in a mass production slave-driving approach.[6] Apart from the sheer inhumanity of this approach, people working these jobs are likely to devote every bit as much thought in their decision to censor or not as they are being paid for, which isn’t much, particularly as they are pushed to “produce” ever more.

The article on Facebook’s approach is instructive, however, in that it reveals something of the sheer scope of the problem. It’s huge,[7] probably much too much for an intelligent approach. Artificial idiocy, relying not on understanding but rather on statistical correlations,[8] seems to be the only alternative.

Which is not at all satisfactory. Which is leaving me pretty damned grumpy.

Update, March 15, 2021: Twitter suspended users mentioning a city in Tennessee named Memphis. Yes, really. It was a “bug,” they say.[9] No, Twitter, no. It is far more than a bug. It’s what you get for using artificial idiocy. It’s the very sort of thing I said would happen.[10]

As the Supreme Court issued an order Monday declaring moot a lawsuit over [Donald] Trump’s blocking of some Twitter users from commenting on his feed, [Clarence] Thomas weighed in with a 12-page lament about the power of social media firms like Twitter. . . .

Thomas singled out the owners of Google and Facebook by name, arguing that the firms are currently unaccountable personal fiefdoms with massive power.

Thomas’ opinion amounts to an invitation to Congress to declare Twitter, Facebook and similar companies “common carriers,” essentially requiring them to host all customers regardless of their views. At the moment, the companies have sweeping authority to take down any post and to suspend or terminate any account.[11]

This issue just isn’t going away. It’s terribly problematic. On the one hand, I can hardly excuse Donald Trump’s firehose of hatred. On the other, social media companies are relying on artificial idiocy to solve their problem of how to control hate speech, which is a grievous mistake,[12] and I can’t disagree with Clarence Thomas’ complaint[13] that power over what I have called the “public square of the Internet”[14] is in unaccountable hands.[15] He’s right.

Update, April 11, 2021: Greg Sargent allows for corporate “free speech” in equating the cases of corporations objecting to Georgia’s new law that may rein in voting rights and alleged social media censorship of conservative views (as with Clarence Thomas’ objection highlighted in the previous update of April 5). In doing so, he illustrates the very problem that gets us here.[16] (In the following Twitter thread, Sargent includes screenshots taken of several online articles. Variations in font and font size result accordingly.)

This is a good @DavidAFrench piece about the dark illiberal turn in attacks on MLB, Big Tech and woke corporations.

2) As @DavidAFrench notes, each of these are being attacked for different things. MLB and companies like Delta are faulted for criticizing the Georgia voting law, Big Tech for supposed suppression of conservative viewpoints.

3) But in all these cases, @DavidAFrench argues, these are forms of speech. That’s what MLB is doing by pulling the game, and what private platforms moderating content are doing.

4) There are additional layers of illiberalism here that I’d like to flag.

Republicans are proposing to use legislative power expressly as *retaliation* against these opinions. 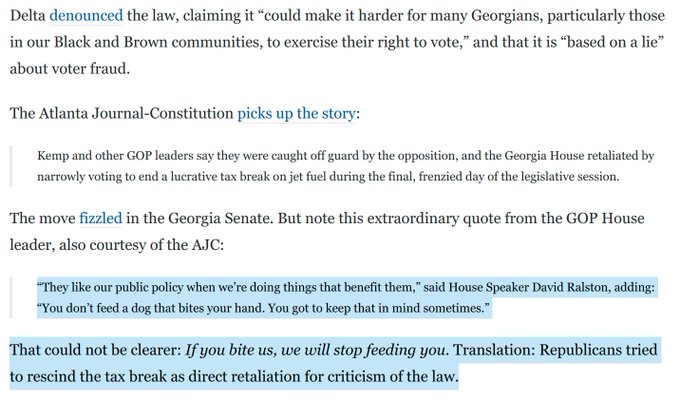 6) Hawley was the front man trying to subvert Biden’s electors, sustaining the 2020 lies that inspired Jan 6.

Criticism of Hawley for this is tossed into the Right Wing Media Victimization Machine, magically converting it into an effort to “cancel” him:

7) The hyped sense of victimization is absolutely central. In the right wing imagination, the big story weaving together all these threads is that our corporate overlords are part of an elite cabal scheming to subjugate virtuous conservatives everywhere: 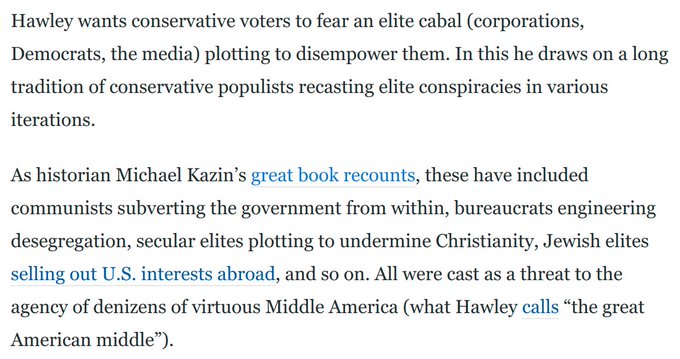 8) In fact, movements are pushing corporations *from below,* amid Trump-stoked anti-democratic tactics + years of relentless stoking of racial conflict.

These movements are driven by an ideal of *empowerment.* It’s ugly to cast this as elite suppression of conservative agency: 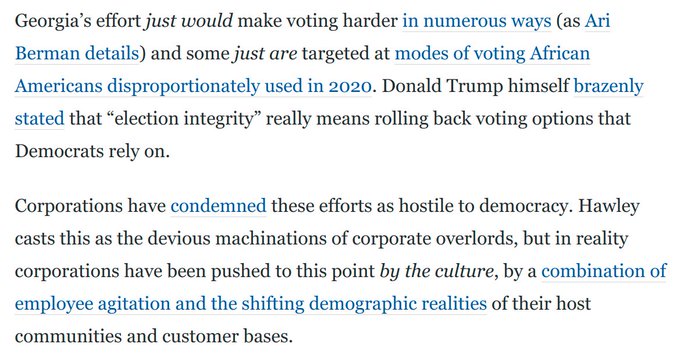 9) Bottom line: In addition to this increasing reliance on illiberal tactics that @DavidAFrench discusses, Republicans are manufacturing all kinds of wildly hallucinatory narratives to justify them.

In so doing, they are dragging their voters to an ever darker place.

First, Sargent reifies a notion of corporate personhood, a dubious concept that, among other things, enables corporations to be sued rather than the people who run them and also casts massive political campaign contributions as “free speech.”[18] It is yet another way of insulating the rich from their crimes, further enabling the double-standard of justice that Jeffrey Reiman critiques.[19] The answer I seek to the question of how to enable a true public square[20] certainly does not lie here.

Second, Sargent thinks corporate “free speech” has served to amplify diverse voices, but when he pivots to criticizing a conservative sense of victimization,[21] he is in fact highlighting a problem that has been exacerbated through conservative talk radio, Fox News, other authoritarian populist and social conservative media outlets, and social media platforms that corporate “free speech” enables, notably through repeal of the Fairness Doctrine,[22] and that culminates in the coup attempt of January 6, 2021,[23] that Sargent alludes to.[24] That other corporations respond to less conservative pressure really only makes of them a mirror, not any sort of progressive or even “liberal” (as in whatever conservatives are against) leader.

Finally, corporations uniformly speak in their own best interest, putatively that of their shareholders—principally the rich. This “free speech” has unquestionably distorted public discourse and reinforced what has, from the beginning, been a constitutional oligarchy.[25] Even when they speak in response to what Sargent highlights as pressure “from below,”[26] they do so to protect their brand rather than from any notion of citizenship. The best that can be said for corporate “free speech” is that it is an inadequate solution that has arguably amplified evil much more than it has good.

Corporate personhood has always been a bad idea. But I had not previously connected it to the problem of corporations co-opting the public square through the Internet.[27]

3 thoughts on “The public square of the Internet”