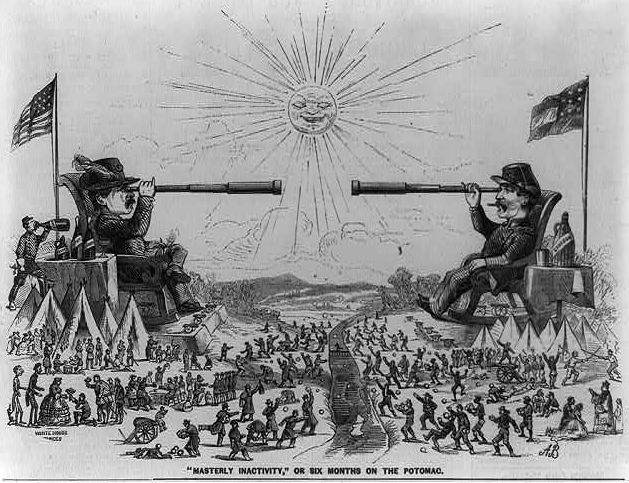 Fig. 1. “‘Masterly inactivity,’ or six months on the Potomac; caricature of inactivity of Confederate and Union soldiers on both sides of the Potomac River between summer 1861 and winter 1862, published in Frank Leslie’s illustrated newspaper, vol. 13 (1862 Feb. 1), p. 176. Cartoon satirizing the extended military standoff between General McClellan’s Army of the Potomac and Confederate General Beauregard’s Army of the Shenandoah during the fall and winter of 1861.” Cartoon by Albert Berghaus, 1862, via Wikimedia Commons, public domain.

I did not write this:

Once a political culture embraces the path of the dark triad—narcissism, Machiavellianism, and psychopathy—negative end products are not simply possible, but inevitable. There’s only one chance to stave off the worst potential outcomes in the United States: Recognize our 50-state partnership as a failed marriage and, like adults, move on.[1]

Though it’s an idea I’ve advocated for some time—honestly, to me, nothing else makes sense—I also regretfully recognize it as enormously problematic,[2] and in fact, the idea of divvying up red and blue states, that B. Duncan Moench reifies,[3] barely scratches the surface of the problem.[4]

Read Moench anyway. Because that’s not really where he’s going. The scenario he envisions is Joe Biden winning a second term and red states seeking to secede. Blue states invade, repeating Abraham Lincoln’s mistake, determined to preserve an untenable union.[5] This is a different scenario from the one I’ve contemplated, in which white Christian nationalists initiate the hostilities.[6]

There’s more to be thought about here but a few ideas come to mind:

But even the idea of secession assumes that the psychopathy that Moench points to[7] does not mean that “red” politicians insist on the whole ball of wax, that is, upon subjugating “blue” areas. I’m not sure that’s a sound assumption. And if it’s wrong, and if rebel forces are able, through surprise, to seize a bulk of the technological advantage, this could be a real rout.

There are more questions than answers here. But I sincerely hope that some folks in charge are planning for worst case scenarios.

2 thoughts on “What if, indeed, it comes to civil war?”