I suppose it shouldn’t be the least bit surprising that social media networks seem collectively to be losing their minds.

I’m sorry to say effective immediately @DPRK_News is defunct. I founded the account in 2009.

Twitter decided today that it violates their rules. I’m not going to label a parody a parody. That moots the point. It gives away the joke.

The DPRK never complained. One of you did. 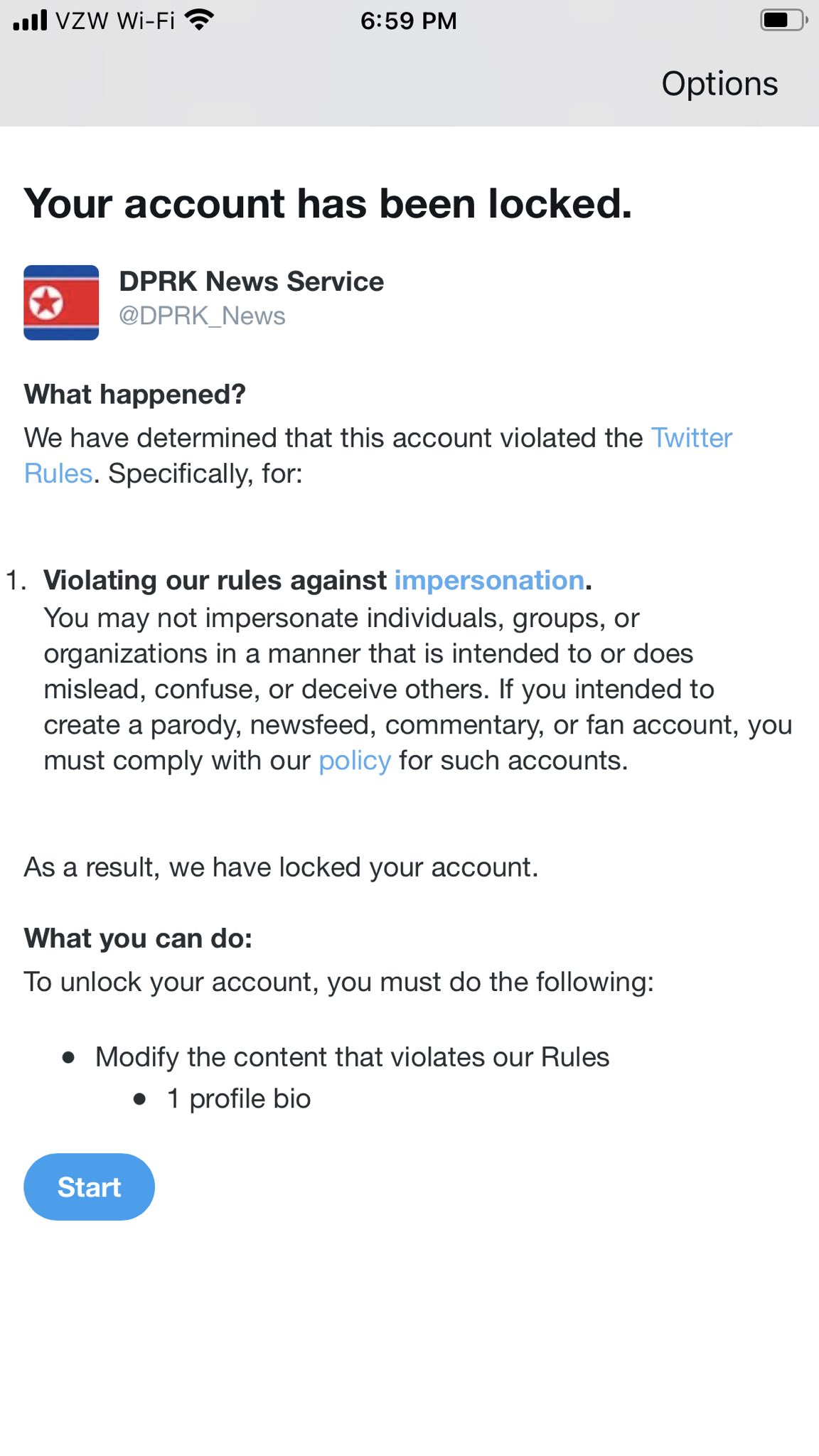 
To be honest, I’d had difficulty discerning whether, in fact, @DPRK_News was a parody account. Sometimes, I swore it had to be. Other times, it was just plausible enough. Which is to say it was pretty damn good parody and this is a loss.

I recently had to close my LinkedIn account because they have taken to censoring my posts, which I do not tolerate. And I don’t even want to get started on the morass that is Facebook (but yes, at this writing, my account there still lives).

There are real problems in the public square of the Internet. First, there is the question of hate speech or speech that otherwise makes people feel unwelcome in this, a public square, and thus threatens to limit “free speech” to bullies. Second, there is the matter of speech that actually incites violence and hatred, such as that by Donald Trump, such as that which coalesced in a coup attempt on the U.S. Capitol on January 6, 2021. Third, there is the problem of misinformation, particularly but not exclusively in a pandemic. Trump has been a problem here, too. Fourth, there is the problem of sheer volume and that the only way that social networks can manage this is through artificial idiocy.[1]

Something to notice here is that these problems exist more broadly in society. Trump enabled white supremacists to come out of the woodwork but he most certainly did not start a white supremacist movement in the U.S. He exacerbated political polarization, often hatefully so, but this polarization dates back at least to Bill Clinton’s presidency and I think Jimmy Carter’s. And the U.S. has largely been an anti-intellectual society from the beginning; it is fertile ground for conspiracy theories and misinformation.

But the social media companies themselves were at least naïve, or, more likely, heedless in a malignant capitalist libertarian sort of way, in taking on the problems of the public square in the first place. To some degree, they have themselves to blame. But that doesn’t mean there isn’t a need for or a value in social media and it certainly doesn’t mean that these companies will be able to solve problems they’ve really merely grossly exacerbated.

Some, possibly including the friend who provides a space for this blog, will point to decentralized networks, which I have participated in in the past. My own experience is that the technical problems 1) require a level of technical expertise which I thought I possessed but in fact most definitely do not—I won’t, by far, be the only one to have misjudged my capabilities this way—and 2) limit the performance and reliability of these networks. But more fundamentally, this approach does not actually address the problems of hate, polarization, and misinformation; it simply removes the companies from a role of managing them.

So I don’t have an answer either. I’ve wrestled with the problem for a while now. I’m truly just flummoxed.[2] But even more, I’m wondering how a solution can make a space for @DPRK_News.

This will vanish in ten minutes, and I can’t leave it pinned, but thanks to everyone who urged against the locking of our account. It would still be locked, but for you.

When you’ve put 12 years into a project, losing it feels (just a little) like losing your home.


If it vanishes from here, I know how to unvanish it. But as it turns out, all that happens is that the script that’s included with the tweet embed code and adds the Twitter formatting stops working.