I got suckered tonight on Park Presidio Boulevard in San Francisco.

I was taking somebody someplace from Marin County when I saw a motor home in the right lane. It’s the sort of motor home one might expect a homeless person to be living in and I noticed writing that I couldn’t make out until I’d actually pulled up behind it (there was less traffic in this lane for some reason): 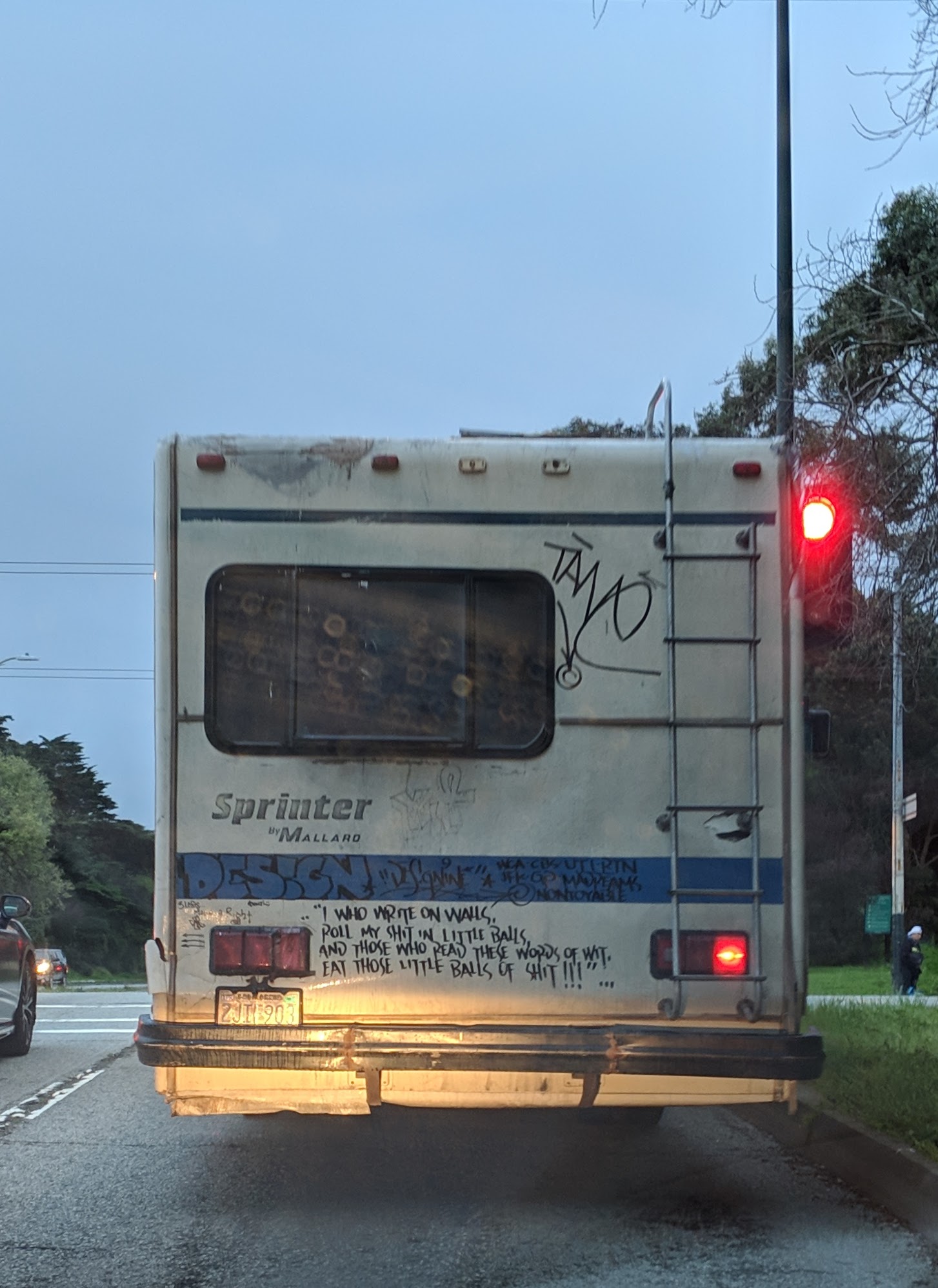 I who write on walls,
pull my shit in little balls,
and those who read these words of wit,
eat those little balls of shit!!!

Yup and yuck. Got me. And not in the way I want to be gotten.

But I was also thinking about it metaphorically, given my experience of the job market:

I who write on walls [post job announcements],
pull my shit in little balls [require arduous online applications],
and those who read these words of wit,
eat those little balls of shit!!! [spend hours feeding the bit bucket]

We had a Comcast technician over today trying to fix a fuck up and my mother told me he was making $12 per hour. She’s been telling me, as she’s dealt with the idiotic company, that everyone she talks to is pleasant and helpful, but that they can’t get anything done because everyone is covering their ass.

That should be odd—month after month, we keep hearing about how unemployment is at what they call “full employment” levels (there’s a nuance there I won’t delve into here)—and these people my mom’s been dealing with should have job marketable skills. If Comcast doesn’t treat them right, they should be happy to tell Comcast to take its minimum wage jobs and shove them.

Instead, these workers are terrified of losing their jobs. This gives the capitalist libertarian lie that labor markets are anything like level playing fields. Rather, we see the oppressive manifestation of the neoliberal wet dream, a dystopia in real life, where the only monopolies that should be subject to antitrust would be labor unions (they’re “monopolies?!??!!!”) and workers are an expense to be minimized at any cost.[1] They might find new jobs quickly enough, but:

Meet the new boss
Same as the old boss[2]

Take another look at that motorhome. Whatever else it is, it is no den of luxury. Its owner is extraordinarily unlikely to even be well off, let alone wealthy. This poet with the maleficent wit might, like me, be among neoliberalism’s discards on the side of the “information superhighway” of “big data” [mining even for spurious correlations] and “artificial intelligence” [idiocy].

That capitalist libertarian ideology of the allegedly level playing field in the job market serves the neoliberal authoritarian reality. And I share the poet’s rage.