Something that has mystified me for quite a long time is that some folks insist on censoring other people’s speech.

I can certainly understand, with the b-word (rhyming with rich) and the n-word, how some words transgress a boundary into hate speech and these I agree should be avoided. But when folks object to other words, I have to wonder why they insist on controlling people’s utterances. There isn’t a “good,” as in justifying, answer to this question.

But there is the matter of control. Sometimes control is legitimate. We should not, to borrow Noam Chomsky’s example with his grandchild,[1] allow children to run out into busy streets. It’s a lot harder to see how words like “bullshit” or “fuck” reach that standard. To the extent they harm, they harm because the listener chooses to be offended, certainly not because of anything inherent to the words themselves.

LinkedIn has now censored two of my posts which used profane words. On this most recent occasion, referring to a recent post on the Irregular Bullshit, for the mere presence of the word “bullshit” in the title of that post, they accused me of bullying and harassment (figure 1). 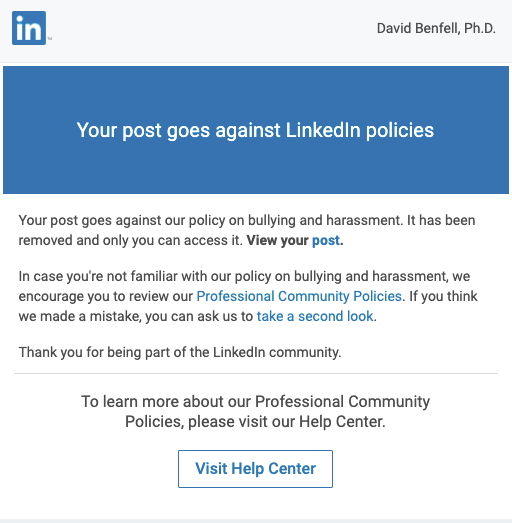 I am rejecting this control. If LinkedIn insists on censoring my posts on such spurious grounds, I have instructed them to close the account. Because this is bullshit.

Update, September 28, 2021: On review, LinkedIn admitted their error, apologized, and restored the post. The account lives for another day.

Update, October 11, 2021: LinkedIn has done it again, this time without even a profanity in the headline, censoring one of my posts. I don’t even want to hear their excuses. I don’t care about their explanations. I want them to close the account and have told them so. I am now treating all emails from LinkedIn as spam.

One thought on “On profanity”