Hillary Clinton needs to just shut the fuck up. She lost an election that even Donald Trump says she should have won, because she is a neoconservative and a neoliberal. She is wrong and her allegation that the Russians have “got their eye on somebody [almost certainly Tulsi Gabbard] who is currently in the Democratic primary and are grooming her to be the third-party candidate”[1] has drawn well-deserved criticism.[2] Forgotten, though, is that these comments expose her own sheer hypocrisy.

Great! Thank you @HillaryClinton. You, the queen of warmongers, embodiment of corruption, and personification of the rot that has sickened the Democratic Party for so long, have finally come out from behind the curtain. From the day I announced my candidacy, there has been a …

… concerted campaign to destroy my reputation. We wondered who was behind it and why. Now we know — it was always you, through your proxies and …

… powerful allies in the corporate media and war machine, afraid of the threat I pose.

It’s now clear that this primary is between you and me. Don’t cowardly hide behind your proxies. Join the race directly.

Senator Mike Gravel: “Tulsi Gabbard has more credibility in talking about peace and proper use of the military than any other candidate literally in American history.” (from interview with @PrimoNutmeg) pic.twitter.com/nsUH7sUcXT

Bernie Sanders was presidential in a way we easily forget in the Trump era:

Tulsi Gabbard has put her life on the line to defend this country. People can disagree on issues, but it is outrageous for anyone to suggest that Tulsi is a foreign asset.

His courtesy has gone largely unappreciated in my Twitter newsfeed. Just one example:

Nobody is forcing these alleged US radicals working for “political revolutions” to make “but muh troops” arguments, yet here they are.

.@BernieSanders is catching a lot of flak for this.

I grew up #antiwar; I disagree with warmongering taken as patriotism in many forms.

But I don’t expect everyone to share my understanding. I think a lot of folks fought, believing to do so was patriotism. https://t.co/3v1OZYRo7S

The questions deepened on Thursday after Ms. [Tulsi] Gabbard threatened to boycott Tuesday’s [October 15] debate, arguing that the corporate news media and the Democratic National Committee are working together to rig the event. (The New York Times is a co-sponsor of the debate with CNN.)[3]

There is a history of the political establishment doing just that (figure 1): 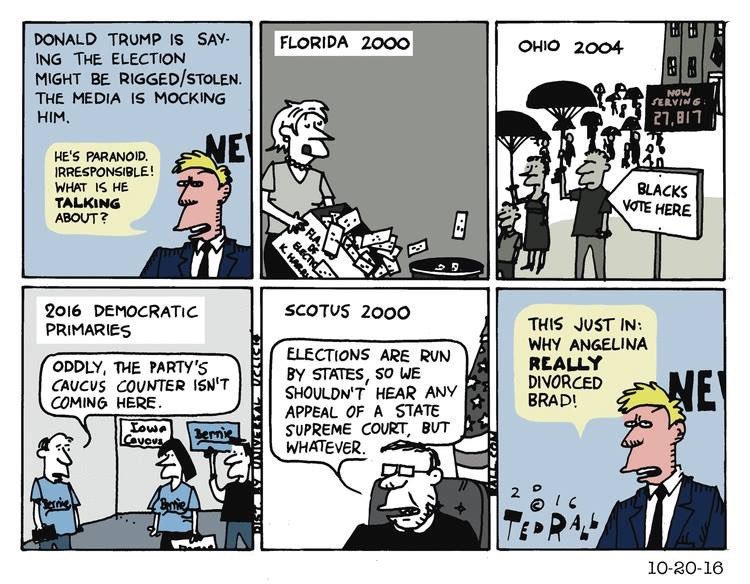 The funding arrangement with HFA [Hillary For America] and the victory fund agreement was not illegal, but it sure looked unethical. If the fight had been fair, one campaign would not have control of the party before the voters had decided which one they wanted to lead. This was not a criminal act, but as I saw it, it compromised the party’s integrity.[4]

And specifically in the 2016 primary, Clinton co-opted the Democratic National Committee, effectively rigging the primary against Bernie Sanders.[5] She was the beneficiary of biased coverage in the New York Times[6] and other mainstream journalistic operations.

The Times has not ignored Mr. Sanders’s campaign, but it hasn’t always taken it very seriously. The tone of some stories is regrettably dismissive, even mocking at times. Some of that is focused on the candidate’s age, appearance and style, rather than what he has to say.[7]

Clinton is the very last person to be complaining about ‘rigged’ elections and ‘rigged’ public discourse.