The bumper sticker reads, “If you can’t stand behind our soldiers, for God’s sake, stand in front of them.”

For me, the implication is clear. I oppose war, therefore I should be caught in the crossfire and shot.

Everywhere I drive in the Pittsburgh area, and driving for Lyft, I do a lot of driving, I see the white-on-black POW/MIA flags that commemorate mythological prisoners of war alleged to have been held long after the end of the Vietnam War.[1] I see tanks, one with its barrel lowered such that it could fire a round right at me as I drive by. I see artillery. And of course, U.S. flags and flags of the various armed services are ubiquitous.

None of this is about the colonial patriarchy for which the U.S. fights. It is simply about valor and sacrifice, conflated with patriotism. Never mind how many civilians are killed in futile, endless wars.

The simple fact is that many, if not most, people in the U.S. are violent. From the Memorial Day banners honoring each town’s dead to the displays of military prowess, people here imbue violence with loyalty.

I’m a long ways from the San Francisco Bay Area bubble here. And it’s easy for me to see what I already knew from when I’ve lived outside that bubble in the past, that people here hold an entirely different view of duty to society.

That’s not at all to say the Left is or the social problems it confronts are absent. Rainbow flags can also be seen. Politicians are quick to condemn hate crimes. Most of my passengers live their daily lives with racial conflict and suffer its consequences.

One of my passengers boasted about his military rank (officer grade) and his (high) security clearance, and went on to say he comes home in fear for his life. 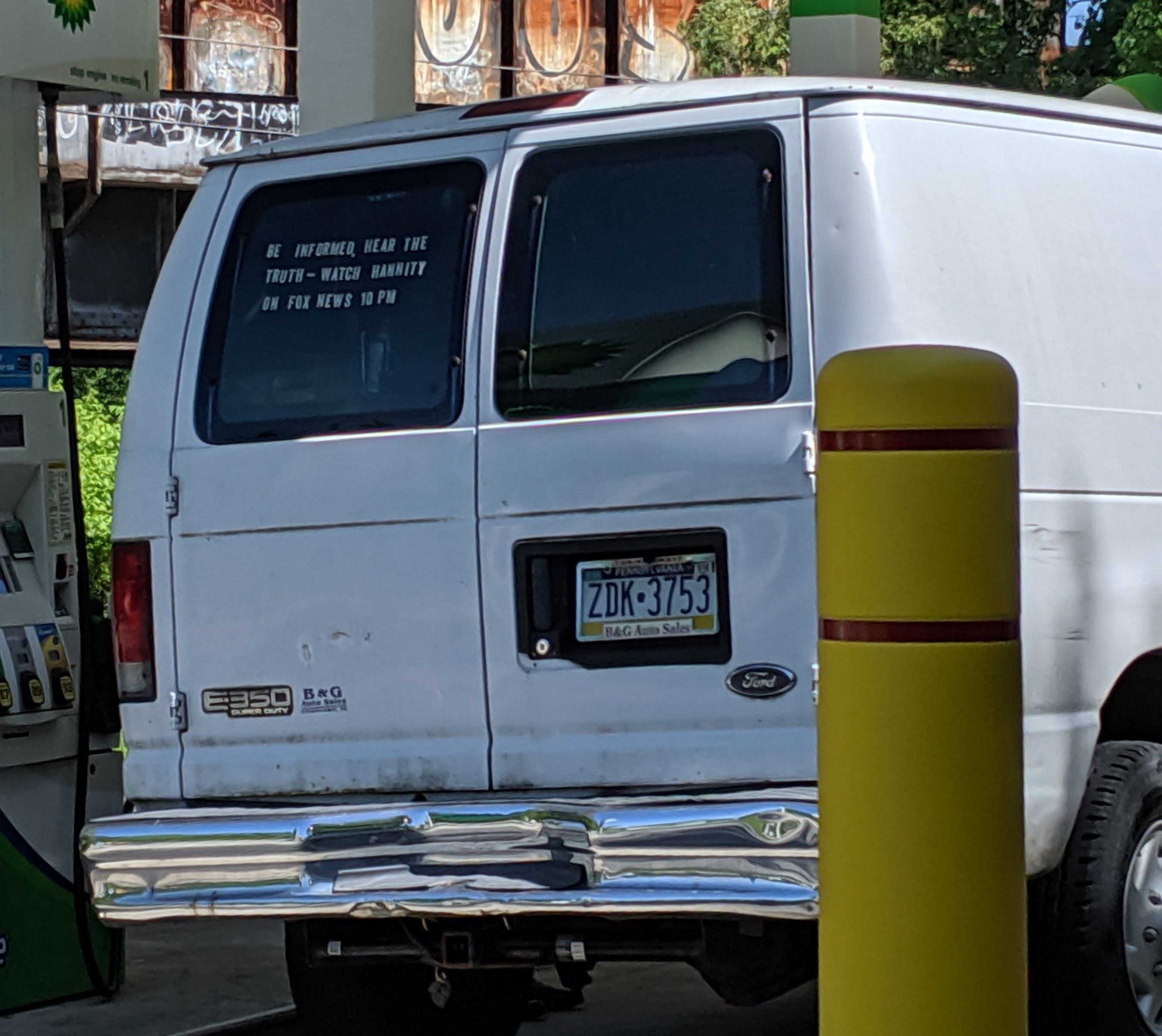 White resentment can also be seen, from the Confederate battle flags hung just below the U.S. ones, to hand-made signs on vehicle windows (figure 1) recommending Sean Hannity for “truth.” I live here on the frontier between, in Colin Woodard’s scheme,[2] the Midlands and Greater Appalachia. Where authoritarian populists might seem less visible in the San Francisco Bay Area, they show no such reticence here.

Many who advocate Donald Trump’s impeachment live in bubbles like that of the Bay Area. But I am by no means alone in fearing the consequences, whether they remain solely in the political realm with even dire potential consequences,[3] or spill over into something much more dangerous.[4] Impeachment advocates have no idea of the violence they risk from people who actively resent and have been alienated by everything people in those bubbles count as “progress.”[5]

Spare me. They’re just as delusional as that delusional raging narcissist-in-chief.