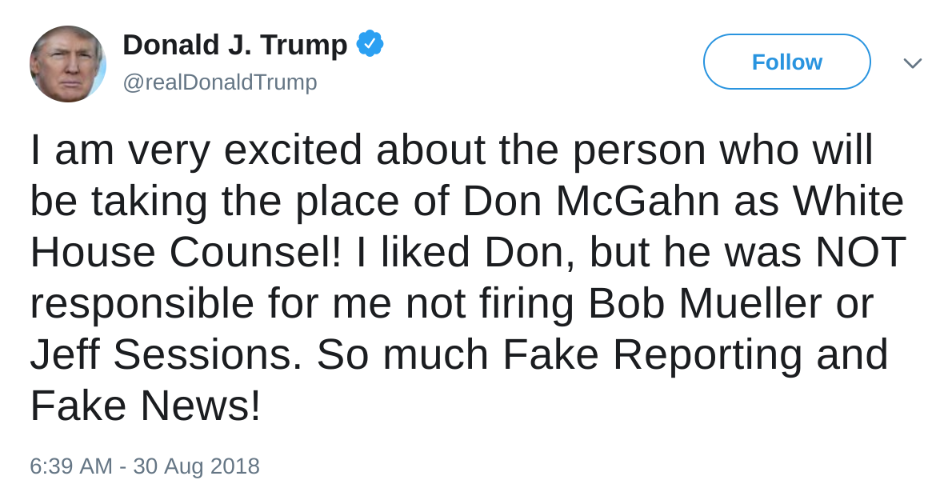 I am very excited about the person who will be taking the place of Don McGahn as White House Counsel! I liked Don, but he was NOT responsible for me not firing Bob Mueller or Jeff Sessions. So much Fake Reporting and Fake News!

The tweet is unclear at best, worthy of question, certainly not of conclusion, but Aaron Blake thinks that Donald Trump might—only might—have been admitting to an attempt to fire Jeff Sessions and Robert Mueller. Blake does conclude that “[a]ll of this undoubtedly leaves a perception that Trump wants people to have — that Trump can and might fire both men — to send a message to Mueller and Sessions. Trump has made clear he views this as his presidential prerogative.”[1]

One of the things I have noticed over the decades is that it isn’t really money that makes the world go round, but rather power. Money is a means to an end. People will do what you want them to do for money, including protecting you, including freeing you to pursue your own interests.

I’m far from the only one to notice this. Critical theory is, at its core, about exposing power relationships.[2] Anarchism is about distinguishing between “legitimate” and “illegitimate” power relationships, and seeking to abolish the latter. Hannah Arendt noted that in Greek “democracy,” power was reserved for those who were “free” from the need to work or labor to support themselves.[3] In Federalist no. 10, James Madison argued that a republic would limit power to those who were most “free” to set aside their personal interests (we see how well that worked out).[4] We might note that in both the latter cases, the class considered “free” included many slaveholders: They were “free” by virtue of their enslaving others, suggesting—as Arendt did—that this sort of “freedom” comes at the expense of the less fortunate, indeed that freedom is, at least to some degree, a zero-sum game.[5] And George Lakoff picks up on this irony, that freedoms may require others to commit to protect or fulfill them.[6]

In the tweet that Blake highlights, Trump is, at the very least, asserting his power, his freedom. That he may so act to remove a check on his own freedom, his own power, is one reason for suspecting he has an authoritarian impulse. Again, this freedom, this power comes at a considerable cost to others.

I remember on the morning that Barack Obama was first inaugurated, in 2009, I was teaching public speaking. I had heard a conspiracy theory that Obama’s predecessor, George W. Bush, was plotting martial law in order to retain power. Commuting and preparing for that class, I hadn’t had a chance to confirm that Obama had, in fact, been inaugurated.

We need to remember here that Bush and his administration are guilty of numerous war crimes and crimes against humanity. His invasion of Iraq was not based on evidence that Saddam Hussein had weapons of mass destruction[7] but rather on neoconservative ambition and a personal animus against Hussein. Power facilitated criminality of the worst sort, just as it does with the Roman Catholic hierarchy and their ongoing sexual abuse of children.

So when it was time for Bush to give up power, we were expecting a criminal of the worst order to relinquish the world’s most powerful means for being a criminal. I lacked confidence he would do so.

But, as my class assured me, Obama was indeed inaugurated. Though they were political opponents, Obama declined to prosecute Bush or his administration,[8] famously expressing his “belief that we need to look forward as opposed to looking backwards.”[9] His administration also declined to prosecute the criminals behind the financial crisis of 2007-2008.[10] It is difficult to avoid an impression that the powerful see other powerful more as comrades and allies[11] against nearly everyone else[12] than as rivals, at least outside the ever rightward-expanding Overton Window.

But this tension between rulers and ruled itself constrains freedom. Rulers long ago understood that it was easier to persuade people to comply than to force their compliance.[13] The need to produce propaganda, the need to avoid too blatantly (ever less so with Trump[14]) contradicting that propaganda, and the often violent competition between rulers over which of them will control what territories and the resources and people within those territories[15] (and the capitalist analog of business competition) are burdens as much as they are expressions of raw power.

Which is to say that this zero-sum notion of “freedom” is not in fact freedom. Albeit with a great deal more creature comfort, at best, it substitutes a new set of burdens for those of work and labor to support oneself.

And in Donald Trump’s case, he lashes out at Mueller and Sessions because despite his pretensions, he is afraid to fire them. Whether or not by design, they encumber him.

We should, of course, spare the powerful no tears of sympathy. The rest of us pay a far higher price for elite privilege. They pursue a delusion that too often injures us or even costs us our lives, whether through dangerous working conditions, dangerous products, the criminal injustice system, environmental calamity, or wars. But recognizing the delusion for what it is is a step toward unraveling it and the system that has been built around it.

One thought on “Donald Trump and the elite quest for freedom”