Update, December 22, 2019: Links to the original charts in figures 1 and 2 had become broken and so I have substituted charts I made following the end of Barack Obama’s presidency. This elides a context in which labor market participation (figure 2) and the employment participation ratio (figure 1) remain at low levels.

So, we are to understand, because of the Iran deal,[1] re-establishment of diplomatic relations with Cuba,[2] Obamacare, and alleged action on climate change and immigration, “Barack Obama is one of the most consequential presidents in American history — and he will be a particularly towering figure in the history of American progressivism.”[3]

There are some caveats that should be inserted there. Some of which Dylan Matthews, who authored that last quote, did indeed insert. He acknowledges that Obama “revived Clinton-style militarism in the Middle East, where periodic airstrikes and special ops missions take the place of Bush-style invasion and occupation. The drone war is a moral catastrophe, and the 2009 surge in Afghanistan was a mistake. And Obamacare “wasn’t single-payer; it lacked a public option, or all-payer rate-setting. And it still left many uninsured.”[4] I would add that the scale of Obama’s response to what is at least one of the most serious existential threats to human  survival.[5] amounts to recklessness.

But as much as I talk about climate change and its implications for our system of social organization,[6] when it comes to the problems of just getting through the day, Obama’s bank rescue, contrasted with the absence of help for underwater homeowners and the unemployed,[7] is consistent with his support for austerity for Greece.[8] In the U.S., the employment to population ratio (figure 1) and the labor market participation rate (figure 2) remain mired at 1970s to 1980s levels. 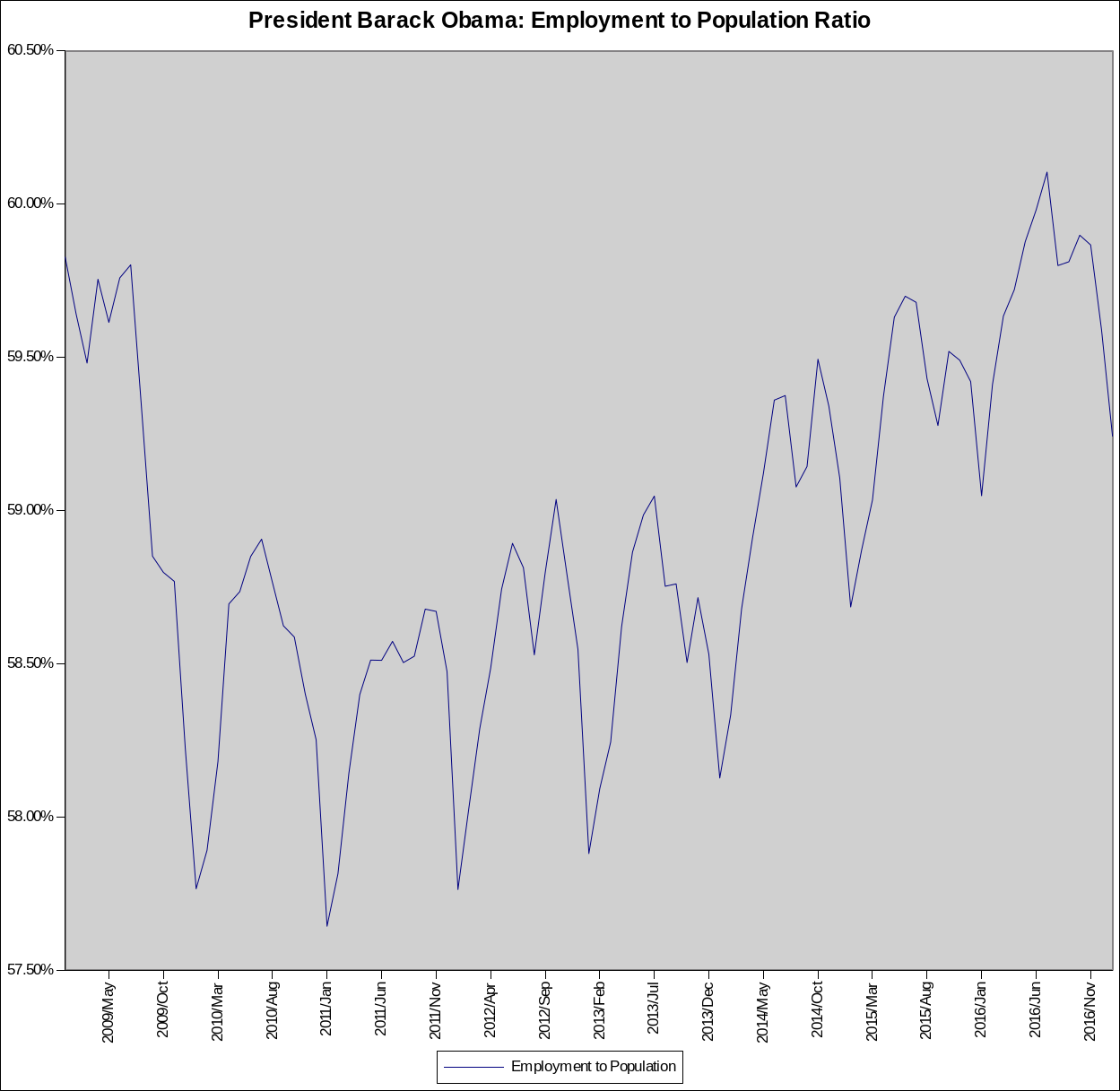 Fig. 1. Employment to Population Ratio during Barack Obama’s presidency, not seasonally adjusted, as of April 2017, inserted December 22, 2019. From Bureau of Labor Statistics data. 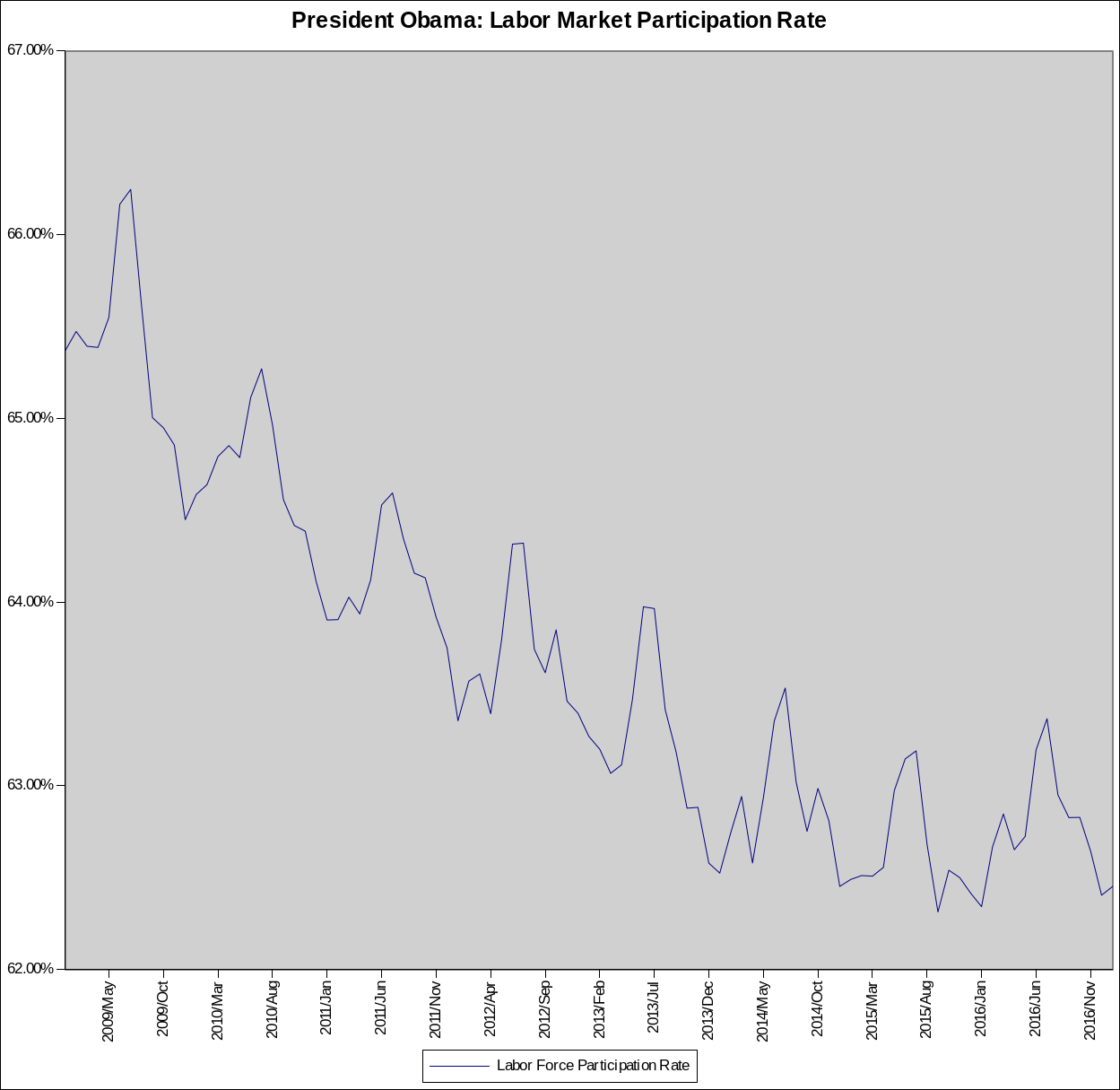 This is no minor matter. Fixing this is what Obama was elected in 2008 to do as the economy was in a tailspin due to the financial crisis that began in 2007. Instead, Obama simply declared that “[w]e all know that there are limits to what government can and should do, even during such difficult times”[9] and left the job of putting people back to work to private enterprise. For me, personally, and for up to nearly 28 million people, according to my calculations, the failure of the economy to offer full-time work has been a catastrophe. And that’s before we even get to such issues as the absence of wage gains for the working and middle classes.[10] And while many of these problems have been developing since the adoption of neoliberal policy as a new orthodoxy in the 1970s,[11] Obama has only paid lip service to the problem. Most crucially, he continues to embrace neoliberal policy as with the TransPacific Partnership (TPP).[12]

And indeed, if we look at who benefits from Obamacare and the TPP, pharmaceutical companies stand out.[13] Just so we know who Obama is really taking care of.

As for the rest of us, we get to be spied upon and told we can compete with a world that works for pennies on the dollar. Meanwhile, the U.S. government commits war crimes in our name.[14]

And to the extent that Obama is indeed a consequential president, he has not merely failed to honor that imperative, he has ignored it.