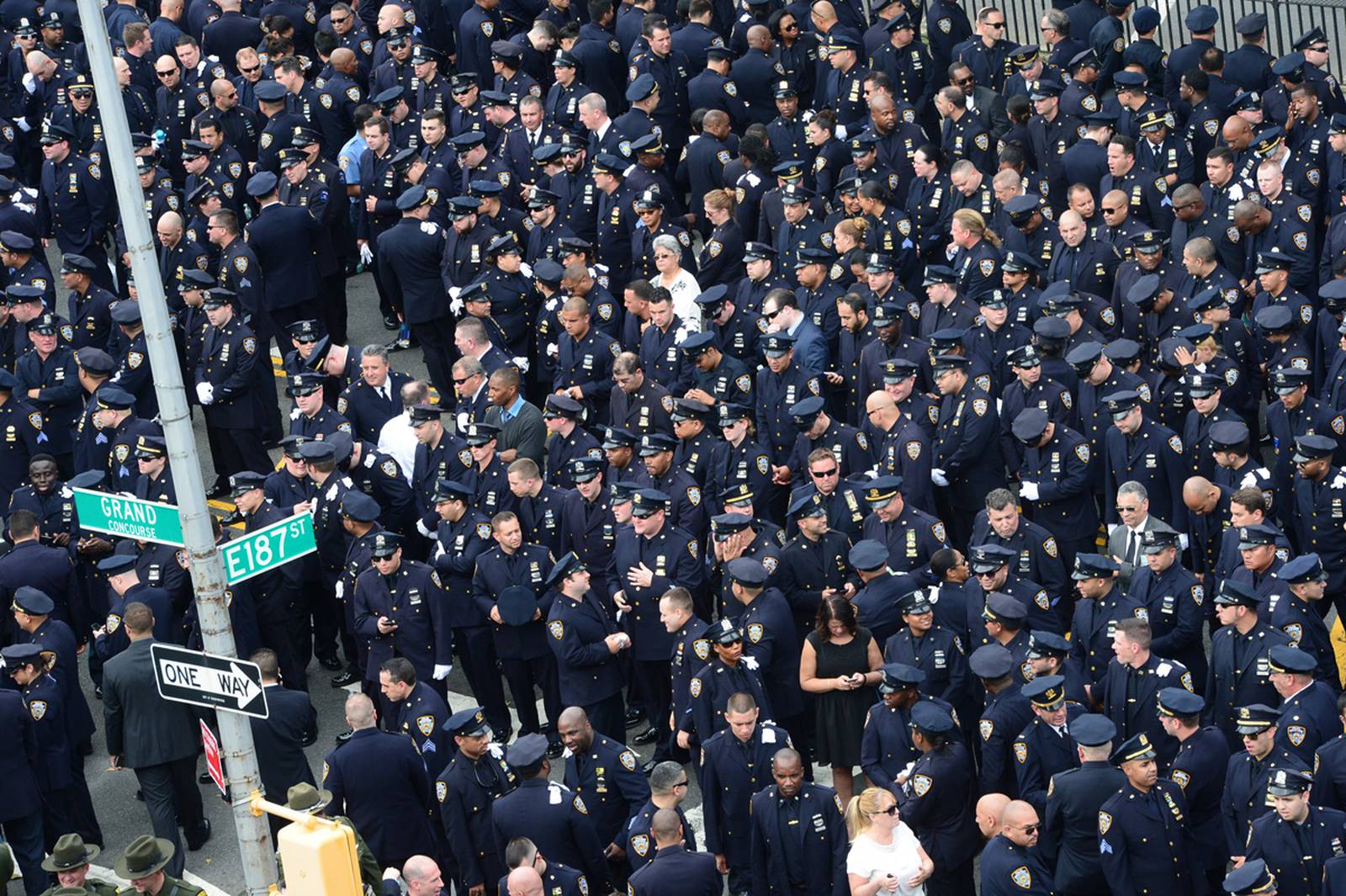 Patrick Yoes, a national secretary of the Fraternal Order of Police insists, “We are public servants. We are not public enemies.”[2] Really? Police in the United States have been uniquely entrusted with a license to employ deadly force. It is amply evident that they are not accountable for this use and that they kill people pretty much whenever they feel like it.

We don’t even know how many people the police are killing or how many of them were unarmed.[3] And prosecutors seem to use grand juries, which otherwise would famously “indict a ham sandwich,” to get out of charging police.[4]

The abuse of power by police has gotten so bad that even some conservatives now recognize that that the problem is systemic[5]:

Darrin Manning’s unprovoked “stop and frisk” encounter with the Philadelphia police left him hospitalized with a ruptured testicle. Neykeyia Parker was violently dragged out of her car and aggressively arrested in front of her young child for “trespassing” at her own apartment complex in Houston. A Georgia toddler was burned when police threw a flash grenade into his playpen during a raid, and the manager of a Chicago tanning salon was confronted by a raiding police officer bellowing that he would kill her and her family, captured on the salon’s surveillance. An elderly man in Ohio was left in need of facial reconstructive surgery after police entered his home without a warrant to sort out a dispute about a trailer.

These stories are a small selection of recent police brutality reports, as police misconduct has become a fixture of the news cycle.[6]

Those are the beginning paragraphs, not on any of a number of anti-police sites that have recently become more prominent, but in an article written by Bonnie Kristian, published first on the American Conservative, and reprinted a few days later in the Imaginative Conservative.[7] In the National Review, Jim Geraghty blasted the killing of Eric Garner:

For starters, this is not the typical “one side claims X happened, the other side claims Y happened” dispute. The incident was caught on videotape. We can watch the chilling moment as Garner literally gasped, “I can’t breathe, I can’t breathe” as the cops were on top of him.

Also at the American Conservative, Jack Hunter implores conservatives inclined to deny that race is a factor in these killings to try actually listening to Blacks.[9] If all this isn’t enough, here’s the Cato Institute’s Police Misconduct site, where this capitalist libertarian think tank attempts to keep a record of all the reports of police abuse.

From my perspective, studying conservatism for my dissertation, all this is amazing. Astounding, in fact. Not because conservatives are usually implicitly racist (and sexist and, very often, classist), but because these conservatives are actually pointing to empirical evidence, which was about as low on the Richard Weaver’s ranking of types of knowledge as one could get.[10]

“Across this country, we seem to be under attack in the law enforcement profession,” Yoes said.[11] No shit, Sherlock. But when even “law and order” conservatives are saying maybe cops ought to stop killing people, maybe cops should be listening.

Instead, cops are being self-righteous, repeatedly turning their backs on New York City Mayor Bill de Blasio, whom they evidently blame for the killing of two New York City police officers. In fact, those two cops were killed by a terribly disturbed young man.[13]

But De Blasio, it seems, had said in a speech responding to protests following Eric Garner’s killing “that he and his wife, Chirlane McCray, had often been forced to engage in one of the most heartbreaking rituals of raising an African-American boy in this country: Delivering “the talk” to Dante, their teenage son.”[14] That is to say, they have repeatedly warned him that he must be more careful around police than a white boy would need to be. Such a “talk” seems only sensible. As Melissa Harris-Perry wrote in the aftermath of another killing,

Trayvon Martin was not innocent. He was guilty of being black in presumably restricted public space. For decades, Jim Crow laws made this crime statutory. They codified the spaces into which black bodies could not pass without encountering legal punishment. They made public blackness a punishable offense. The 1964 Civil Rights Act removed the legal barriers but not the social sanctions and potentially violent consequences of this “crime.” George Zimmerman’s slaying of Trayvon Martin—and the subsequent campaign to smear Martin—is the latest and most jarring reminder that it is often impossible for a black body to be innocent.[15]

This is a reality for Blacks in the United States that police, who claim to be “public servants,” refuse to hear. Instead, they sulk. They turn their backs. And they go on killing people.

When I was growing up, if a person abused a privilege, it was taken away. This is elementary to accountability. Instead, police are not only refusing to stop killing people, not only refusing to be held accountable for those killings, but demanding unconditional obedience—all at the point of a gun.[16] Jim Geraghty’s headline was “Every Once in a While, the Cop Isn’t the Good Guy in the Story.”[17] But this isn’t an “every once in a while” thing. It’s happening every day. The cops have become the bad guys and they must be disarmed. 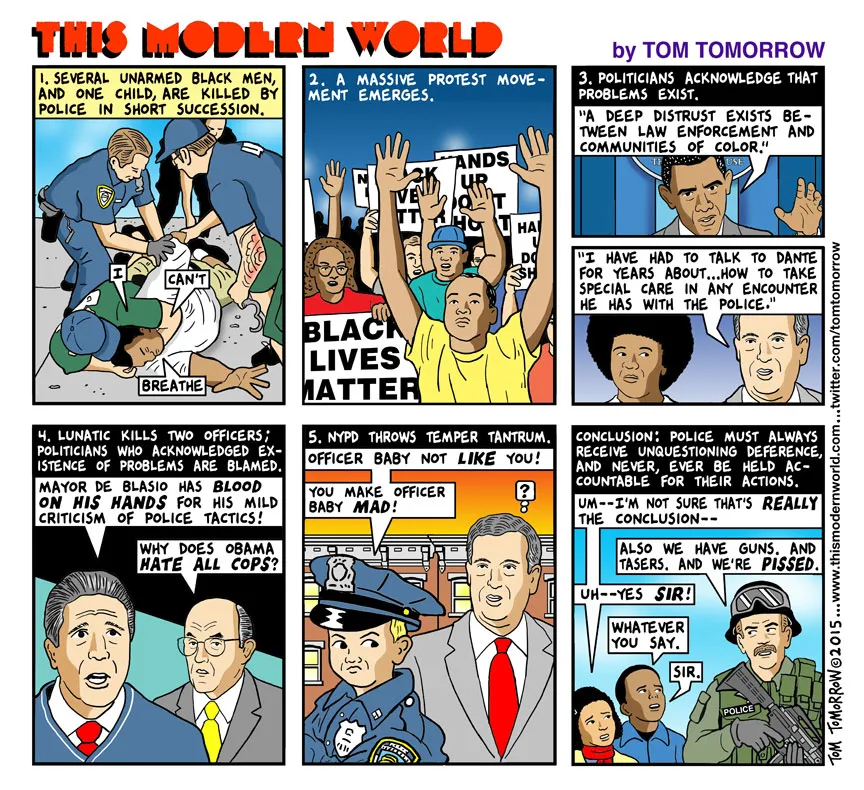 Update, April 22, 2021: A larger question in the aftermath of Derek Chauvin’s conviction for the murder of George Floyd[19] is whether politicians will go beyond symbolic gestures and follow through on what so far have been empty promises of police ‘reform,’[20] itself a woefully inadequate approach.[21] Too many people are calling this conviction ‘justice,’ when justice would mean that Floyd would still be alive and breathing;[22] that the systemic and blatant white supremacy in policing that killed him and so many others[23] had been abolished; that the economic injustice[24] and the systemic bigotry of the criminal injustice system that sends so many people, particularly of color,[25] into a largely ineffective but hugely damaging system of mass incarceration[26] had been remedied; and frankly, that reparations had been paid, not only to Blacks,[27] but really to all colonized people, defined in critical theory as all who are subject to the structural or overt, implicit or explicit violence of economic, political, military, or religious authority,[28] who pay with their lives in countless ways for the curtailment of their potential and the deprivation of their rights[29] so that the rich may be richer and the powerful more powerful.

6 thoughts on “Time to take the guns away”