The Boston Globe reports that the military has finally offered support for its claims that Iran has been supplying arms to Iraqi insurgents. In addition, the military specifically points to the “Quds Force of the Iranian Revolutionary Guard, which reports to Iran’s supreme religious leader, Ayatollah Ali Khamenei,” as the culprit.

The article shows a picture of an Iraqi police vehicle destroyed in an attack the military claims employed armor-piercing explosives. Yet it is not clear that any armor even existed on this vehicle. While it is clear the vehicle is badly damaged, it is unclear that the body of this rather ordinary looking vehicle was penetrated. It does appear that the windshield has been blown out. 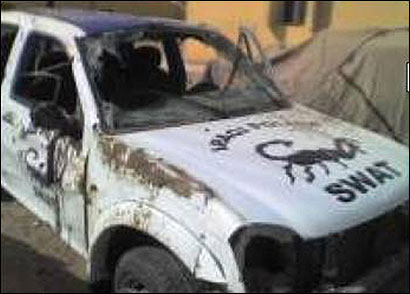 Far down in the article, Iran’s response to these allegations is summarized in a single line: “Iranian officials immediately denounced the allegations as propaganda.” As well they might.

Further down in the article:

Trita Parsi , president of the National Iranian American Council, a Washington-based educational organization representing the Iranian American community and an adjunct professor at Johns Hopkins University, said “there is a tremendous amount of skepticism” about the US intelligence on Iran’s activities in Iraq.

“People fear this is about trying to expand the war into Iran or trying to pass blame onto Iran for the disaster in Iraq,” he said.

Several US specialists also have questioned why the Bush administration has placed such a high focus on the Iranian-supplied weapons in Iraq, since even by US estimates, they account for a small percentage of the total of US casualties.

Count me amongst the skeptics. Despite an emphasis favoring U.S. military claims (largely through placement in the story), the article in sum fails to support those claims.